Marine veteran among US citizens detained by ICE, ACLU says 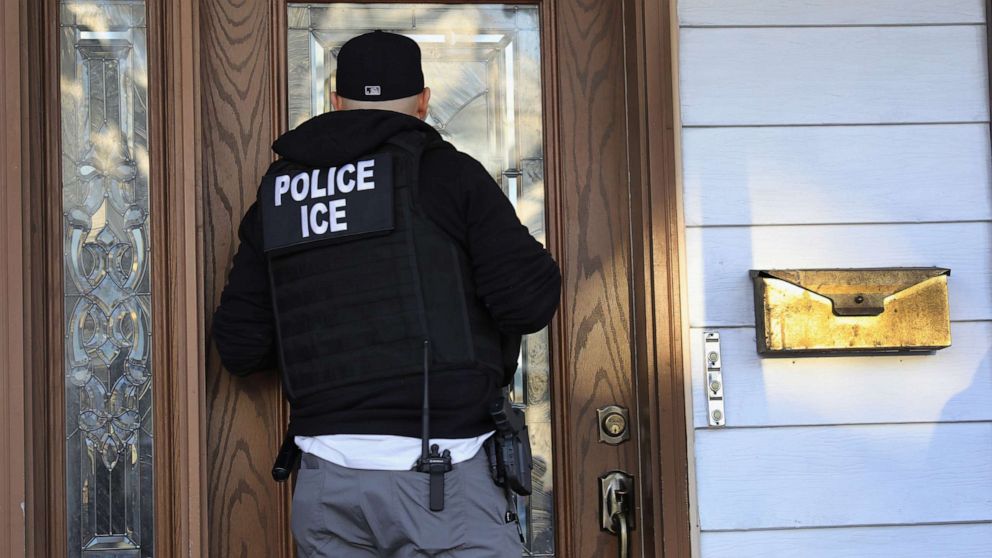 In 2014, after serving in the Marine Corps for nearly three years, Jilmar Ramos-Gomez returned home to Grand Rapids, Michigan, where he was born and raised, and found himself struggling with post-traumatic stress, not able to adjust to his new life as a civilian.

He says he reached a breaking point when he suffered a psychotic episode on Nov. 21, 2018, and was arrested by the Grand Rapids Police for trespassing on the roof of a local hospital.

Ramos-Gomez was not a patient but went there because he was struggling with his post-traumatic stress, according to Miriam Aukerman, his lawyer and a senior attorney with the American Civil Liberties Union in Michigan.

Following his arrest, Ramos-Gomez was booked into the Kent County Correctional Facility, a jail in Grand Rapids.

An ACLU lawsuit says he was then detained by Immigration and Customs Enforcement (ICE) without probable cause and held in a detention center for three days, despite his having -- and ICE knowing -- that he had multiple means of identification in his possession showing he was a U.S. citizen -- including a REAL ID driver's license and U.S. passport.

A statement later released by ICE says Jilmar Ramos Gomez allegedly told officials he was from a foreign country when he was in custody on Nov. 23, 2018. In its lawsuit, the ACLU asserts, however, that the evidence shows ICE officials had proof of his citizenship before and after they spoke to him.

Ramos-Gomez is one of some 20,000 U.S. citizens detained by ICE over the past 10 years, according to the Cato Institute. ICE has declined to release any figures.

"There's been a ratcheting up of deportations and arrests by ICE over the last 10 years or so and these types of mistakes are to be expected but are unacceptable," said Douglas Rivlin, director of communications for America's Voice, an immigrant rights advocacy group. "We expect very high standards from our federal officials but we are not getting the level of accuracy and competence that we need to get from our federal officials."

The number is higher for lawful permanent residents, according to the Cato Institute. Data released by the Transactional Records Access Clearinghouse, a non-partisan organization that releases information about federal enforcement, show that, between 2008 and 2012, ICE issued detainer requests against 28,000 legal permanent residents.

Since ICE has not released documents or information on any of the detainer requests, the reasons behind issuing them are unknown.

"An LPR can be lawfully detained for removal purposes if they have a criminal conviction that makes them subject to deportation," said Jennie Paquerella, director of immigrants' rights and senior staff attorney for the ACLU of Southern California. "The problem is that ICE often puts detainers on LPRs who do not have such convictions and sometimes no convictions at all."

Pasquerella recently won a lawsuit that ruled that ICE's primary deportation program unconstitutional. The lawsuit, called Gonzalez v. ICE, is based on Gerardo Gonzalez, a natural born U.S. citizen who was issued a detainer request by ICE in 2012.

According to the complaint, ICE has subjected more than 2 million people to these unconstitutional arrests since the inception of the program in 2008.

"ICE is doing everything that they possibly can to prevent people who are in their custody from accessing attorneys, even from having their families know where they're being held," Rivlin said. "It's a very secretive process."

ICE declined to comment on the process federal officials have to follow when someone is detained. According to its website, facilities follow ICE's National Detention Standards, which state that only "non-U.S. citizens who are apprehended and determined to need custodial supervision are placed in detention facilities."

According to the ACLU lawsuit, when he was arrested, Ramos-Gomez not only had his U.S. passport and REAL ID driver's license, but also his Marine Corps identification tags. At the jail in Grand Rapids, the lawsuit says, an off-duty officer with the Grand Rapids Police Department emailed an ICE agent to check on his immigration status after seeing news of his arrest on TV.

The officer claimed he suspected terrorism but emails and exchanges between the GRPD officers and ICE officials published by the ACLU reveal, the group says, that the officer never indicated the issue was urgent or that it involved terrorism. In his email, the lawsuit says, he said only that he was concerned with Ramos' immigration status.

The email resulted in ICE agents speaking to Ramos-Gomez in the Kent County jail, the ACLU says. And even though the agents reviewed his Real ID driver's license and a database that listed Ramos' birthplace as Michigan, the lawsuit says, he was nevertheless then sent to another immigration detention center in Michigan on Dec. 14, because ICE officials still believed he was undocumented.

"He's booked in and he has his REAL ID compliant license that shows he is a veteran and here lawfully," said Aukerman, his attorney. "And while he's there, he does not get the care that he needs and so his mental health seriously deteriorates."

When ICE started removal proceedings, the notice charges incorrectly stated that Ramos-Gomez was a Guatemalan citizen who arrived unlawfully in the U.S. While he was born in Michigan, his family is from Guatemala, but in their statement, officials did not provide an explanation for why they indicated he was not a U.S. citizen and, instead, from the Central American country. Before ICE could continue, Ramos-Gomez's family attorney intervened.

An ICE agent then again reviewed and confirmed Ramos' citizenship and he was released on Dec. 17, 2018, almost a month after his arrest.

Since his release, Ramos-Gomez says he is still suffering from the trauma of being detained and almost deported.

Nearly a year after his arrest, the city of Grand Rapids settled a lawsuit brought by Ramos-Gomez, the city commission agreeing to pay him $190,000 for the department's involvement in his detention.

Following the settlement with the city, the ACLU along with attorneys at the Loevy and Loevy law firm filed a lawsuit and a complaint against ICE and the Department of Homeland Security alleging wrongful detainment of the Marine Corps veteran. The ACLU is seeking unspecified compensation for Ramos-Gomez and records pertaining to his detainment and data on other U.S. citizens and lawful residents who have been detained in the hopes this situation from happening to others.