Car bursts into flames at conclusion of Massachusetts high-speed chase 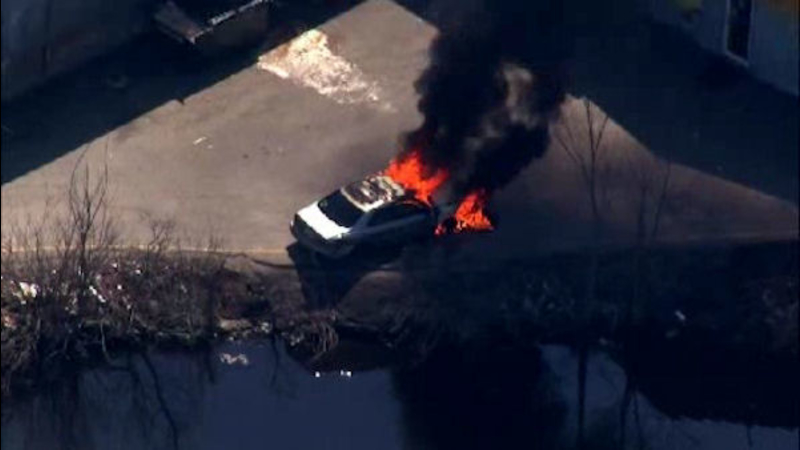 Car bursts into flames at conclusion of Massachusetts high-speed chase

BOSTON, Massachusetts (WABC) -- A high-speed police pursuit through a half a dozen towns in Massachusetts ended with a fireball as the chase played out on live television.

The drama began Wednesday morning when officers approached a Toyota Camry stopped near a dam in Walpole, about 30 miles south of Boston.

The officers approached the driver and tried to talk to him, but they say his answers were bizarre.

According to police, the driver then took off, dragging one officer about 100 yards. Fortunately, he was not injured.

The driver of the Camry continued to treat the road like a racetrack, weaving his car in and out of crawling traffic for several minutes before he spun out in the middle of the highway.

The car continued to speed into Dedham, before the chase moved into Boston. There, the driver ditched the car before it suddenly burst into flames.

After running, he darted into an apartment building and reportedly tried to bribe a man into letting him into his place. But police caught up to the driver and arrested him, before putting the word out on Twitter that everyone was safe.
Related topics:
trafficmassachusettspolice chasehigh speed chase
Copyright © 2022 WABC-TV. All Rights Reserved.
TOP STORIES
Democrats choose Hochul for NY governor; GOP picks Zeldin
New York Primary Results
Husband says wife is 'scared' after brutal subway attack in Queens
LIVE | Eyewitness News This Morning
AccuWeather: Warmer but still dry
Where to watch 2022 Fourth of July fireworks
Subway station saxophonist raises $100K after arrest in Midtown
Show More
Video shows gunman on scooter targeting NYC pedestrian
R. Kelly due in court for sex abuse sentencing in NYC
Witness: Trump grabbed steering wheel, demanded to go to Capitol
Mayor: Giuliani should be investigated for falsely reporting crime
Epstein associate Ghislaine Maxwell sentenced to 20 years in prison
More TOP STORIES News