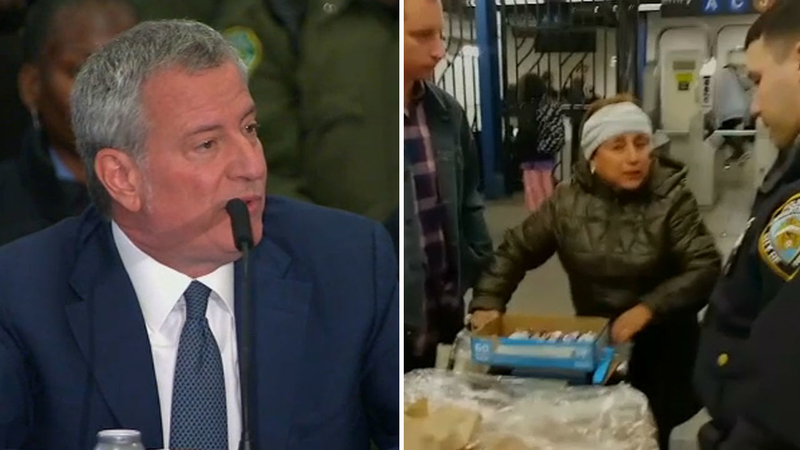 NEW YORK (WABC) -- NYC Mayor Bill de Blasio is insisting the MTA needs to make room for vendors in the subways after two women were taken into custody for selling churros. But the transit authority says it's not that simple.

De Blasio suggested Thursday that the MTA designate zones where food vendors can sell their goods -- which would free up police officers to focus on keeping New Yorkers safe.

The proposal comes after two high-profile arrests of women selling churros within the last week.

"I think the underlying reality is if someone wants to sell something in the subway, I would call on the MTA to delineate spaces where they can do that," de Blasio said. "Can we find some designated spaces, make them available to vendors, have a permitting process -- department of health look at their food -- whatever it is. It's a different reality than what goes on over ground, above ground. We have an opportunity in the subways to do something smart and I think the MTA should do it."

The MTA responded and said there is still a lot of work to do before moving forward with the mayor's plan.

"NYC DOH is responsible for licensing and regulating food vendors. That's not what the MTA does. We are responsible for running a safe and secure transit system. The recent incidents with vendors involved unlicensed vendors. The city has not raised the cap since the '80s," an MTA spokesperson said.

MTA CEO Pat Foye said a lot of the responsibilities that would be involved in such regulations are the city's -- including the health department's regulation of food.

"The unlicensed food vendors in the news who have been in the last couple days are unlicensed. That's a problem because cooked foods, depending on how they are prepared, stored, etc., can be a danger to public health," Foye said. "And that's why the NYC health department regulations presume if you don't have a license, then you are an unlicensed food vendor, because of the danger to public health."

Foye went on to say that he is concerned about trash, vermin and the costs -- but he looks forward to the city's proposal and it will be reviewed seriously.

While the city and MTA go back and forth on a potential subway vendor plan, they both seem to agree that the NYPD officers currently deployed to the subways should focus on greater public safety threats, not women selling churros.