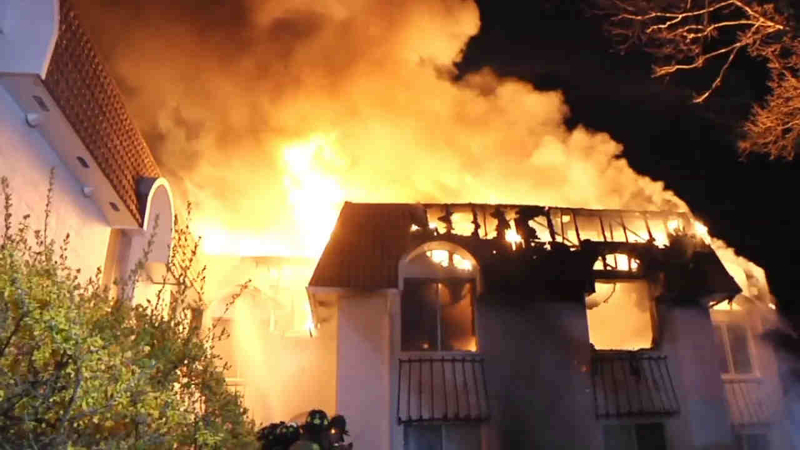 MEDFORD, Long Island (WABC) -- At least a dozen residents were left homeless by a large fire that tore through a Medford condo complex.

It took hours to put out the fire, but only minutes for the flames to rip through at least eight buildings at the Blue Ridge Condominiums in Medford. It all started shortly after midnight Friday.

"Minutes later the fire was just ripping out of the roof," said Nick Disabatino, a displaced resident.

Disabatino was among a dozen or so left homeless when it was all over.

"It was crazy. I can't believe it took out so much of the complex. It was ridiculous," Disabatino said.

Ridiculous, but sadly routine because of the way this complex was built, according to Medford's fire chief.

"It's just the type of construction it was built with, the lack of firewalls between the units," said Chief Frank Rivera.

The fire started in a second floor condo, which enabled the fire to spread all across the roof of the buildings. Still, police did evacuate the buildings in about five minutes.

Once the fire was finally out, firefighters discovered a pet cat inside the condo where the fire started.

A paramedic who lives nearby jumped in to help.

"She wasn't breathing too well, we had her on oxygen and did the best I could to get her there as fast as I could, so the doctors who could save her were able to save her life," said Keri Engel, a paramedic.

Other survivors included elderly residents just trying to salvage their family memories in the charred debris.

"Almost all these women are unfortunately widowed over here and it's upsetting. Their lives are in those houses," said Lynn Reale, a condo resident.

Lives were disrupted for the second time this week in Suffolk County. A neighborhood was on edge as giant flames shot closer and closer to additional homes.

"When I heard this, this morning, I was like, 'It's my neighbors,' It's upsetting," said Betty Miserendino, a condo resident.

"That's the main thing, everything else is material, can be replaced," a resident said.

All of them were able to walk away with what's most important, their lives.

Every apartment in the condo complex was occupied.