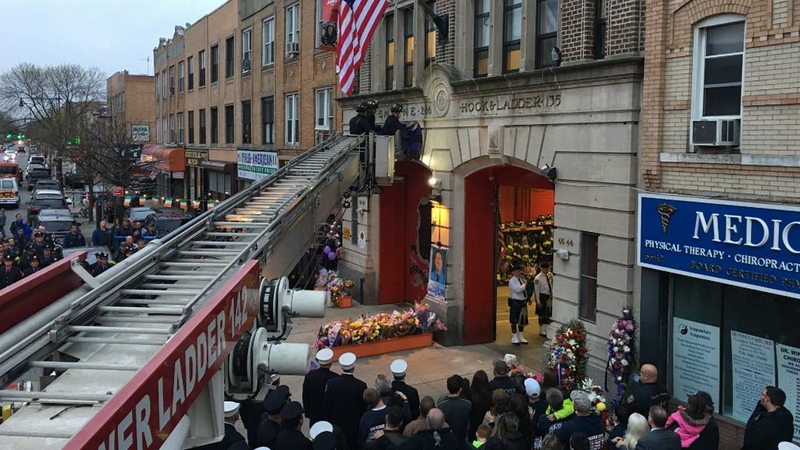 Tolley, 42, was a 14-year veteran of the FDNY, and was also a volunteer firefighter on Long Island.

Friday night, the emotion spilled out at the firehouse where William Tolley spent nearly his entire career, the ground wet with the tears of heroes.

His close friend Aaron listed the simple priorities of a deeply respected man.

"Number two, this job, which we take for granted every damn day. We don't realize how dangerous it can be at times," Aaron said.

That searing reminder as Ladder 135 responded to an ordinary call. A small fire in an apartment building.

Somehow, Tolley lost his balance and plunged five stories to his death.

Her dad was one of the senior firefighters in this house. He was a mentor to countless others who passed through here.

"He showed the way he was a leader he inspired, many guys were brought up under his wings," said Captain Rich Blasi, FDNY Ladder 135.

"I am the older brother of my baby brother Firefighter William Tolley, who gave his life yesterday doing what he loved to do, serving the community, working with his brothers, the amazing men standing behind me today," said Robert Tolley, the victim's brother. "They were there with him in his final moments because I could not be, and I'll always be grateful for that."

Tributes to Tolley extended to Long Island, where he lived and served with the Bethpage Fire Department. He started as a junior firefighter in Bethpage before becoming a lieutenant in the Hicksville Fire Department.

Bunting hung on the Bethpage firehouse Thursday night, and flags were lowered to half staff.

Funeral services will be held Thursday at St. Martin of Tours in Bethpage.

Tolley also played the drums in the Long Island metal band Internal Bleeding in his free time. The band called Tolley "their supplier of insane laughter" on its Facebook page

Captain Doug McDonald at the Hicksville Fire Department showed us the Rescue 8 rig to be memorialized in Tolley's name. Tolley helped design it during the 14 years he volunteered here.

"Just to be around Billy, you knew you were gonna be OK cause Billy was there," said Captain McDonald.

Other neighbors, like Jack Rewkowski, whose uncle was with the FDNY, shared in their grief.

"It just makes me sad," he said. "It really does. It's a shame, because when you have people like that who are willing to do that for a living, to protect us basically, we need more people like that."