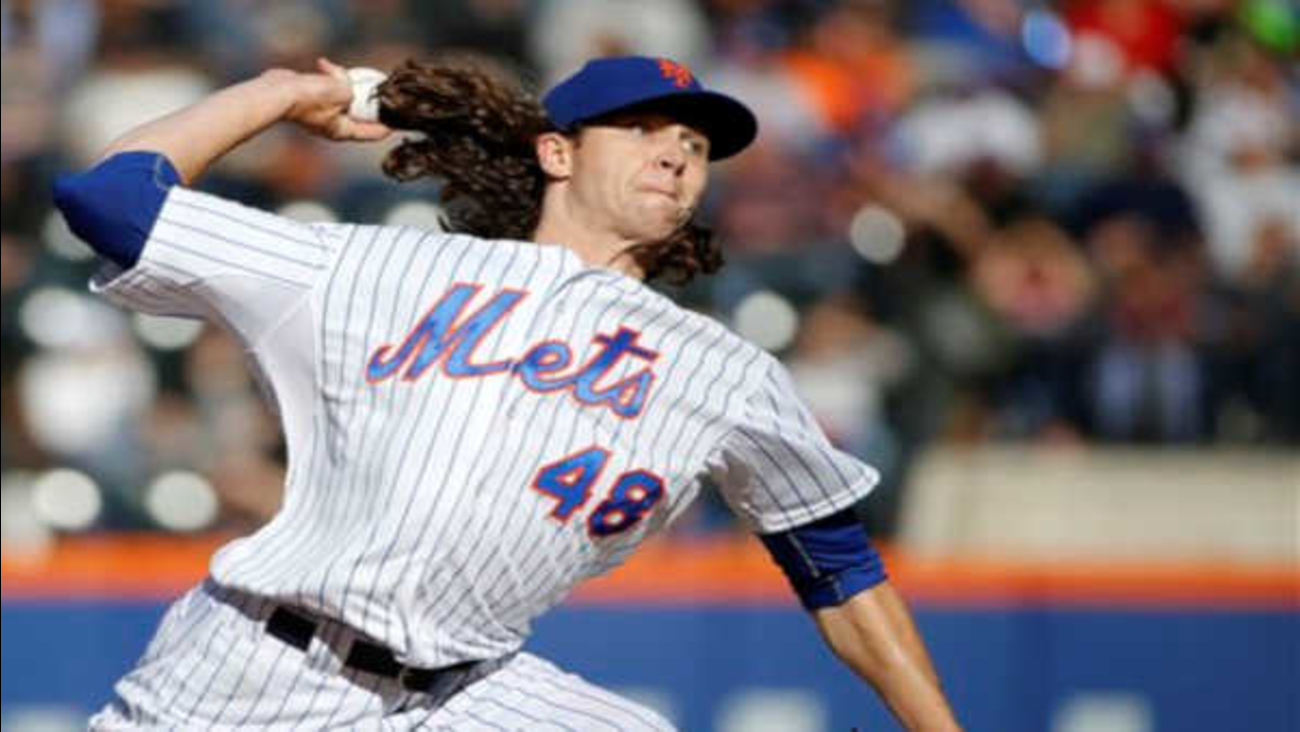 One day after Washington ace Max Scherzer pitched a no-hitter with 17 strikeouts to complete a doubleheader sweep, the Mets (90-72) made a run at a combined no-hitter of their own. They reached 90 wins for the first time in nine years and stopped a five-game losing streak that cost them home-field advantage in the Division Series against the Dodgers.

Next up, deGrom starts Game 1 in the best-of-five matchup Friday at Los Angeles.

Bryce Harper hustled for a two-out double in the ninth to finish 1 for 4, but that wasn't enough to beat out Miami speedster Dee Gordon for the National League batting crown.

The slugger ended his sensational season with 42 homers and 99 RBIs.

Jeurys Familia retired Jayson Werth on a fly to center for his 43rd save, equaling the franchise record set by Armando Benitez in 2001.

With the Mets gearing up for their first postseason appearance since 2006, deGrom was pulled after throwing 72 pitches in four innings. He struck out four of his first five batters and finished with seven strikeouts.

Bartolo Colon and Logan Verrett each tossed a hitless inning of relief before Niese entered in the seventh. With two outs, Robinson sent a sharp two-hopper up the middle that went between Niese's legs and caromed off the shin of shortstop Ruben Tejada as he tried to make a sliding stop.

Tyler Clippard (4-1) struck out two in a perfect eighth. Moments later, Granderson launched a drive to center off Blake Treinen (2-5) for his 26th homer of the season and third hit of the game.

It snapped New York's scoreless stretch of 18 innings and marked the team's second run in a span of 43 innings.

Following the final out, Mets players came back onto the field to salute a crowd of 41,631 that pushed New York's season attendance to 2,569,753 - the highest since the club drew more than 3 million during Citi Field's inaugural season in 2009.

With the NL East championship banner flying above the ballpark and flapping in the wind, captain David Wright grabbed a microphone and thanked fans for their support.

For the second-place Nationals (83-79), heavily favored to win the division and - by some - even the World Series way back in spring training, it was a fitting end to a tumultuous and disappointing season.

Key players such as pitcher Jordan Zimmermann and shortstop Ian Desmond can become free agents, and it might have been the last game with Washington for embattled manager Matt Williams.

Amid speculation Williams is likely to be fired, general manager Mike Rizzo said a decision will be made soon.

Nationals: Harper was back in the lineup after sitting out the second game of Saturday's doubleheader. He was hit by a fastball from hard-throwing Noah Syndergaard in the opener before connecting for a home run his next time up. But after the game, he was heavily bandaged in ice.

Mets: Manager Terry Collins didn't sound optimistic about Juan Uribe being available for the Division Series, though the reserve infielder has not been ruled out. Uribe hasn't played since Sept. 25 because of a chest cartilage injury.

Nationals: After learning Williams' fate, the Nationals look ahead to their 2016 season opener April 4 at Atlanta.

Mets: Two workouts are planned this week at Citi Field before the Mets travel to Los Angeles on Wednesday. They will return home for Game 3 of the NLDS on Oct. 12, with Matt Harvey scheduled to start.