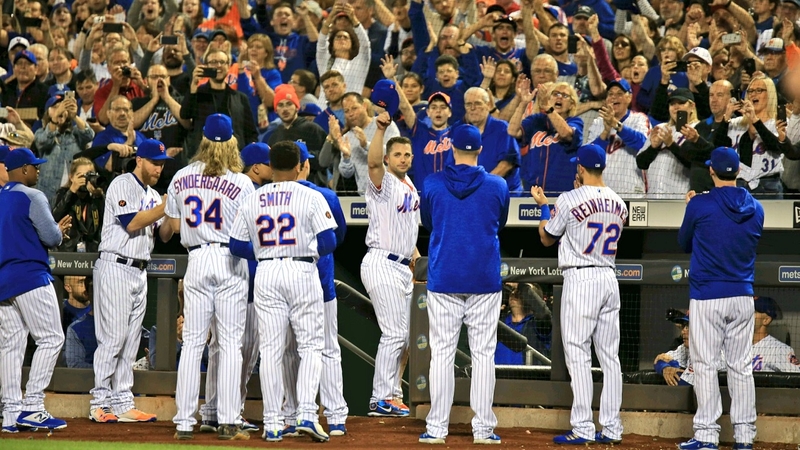 FLUSHING, Queens (WABC) -- David Wright has left to a long standing ovation before a packed crowd at Citi Field in his farewell game for the New York Mets.

Wright's daughter, Olivia Shea threw out the first pitch before the game:

David Wright had his 2-year-old daughter, Olivia Shea, throw out the first pitch before his last game.

It's the most adorable thing you'll see today 😍 pic.twitter.com/hOzvKDyd7t

The team captain went 0 for 1 with a walk Saturday night against the Miami Marlins and was removed after two plate appearances as planned. On defense, he handled a one-hopper to third base with no problem.

Wright, who fouled out to first base his final time up, took his position before the top of the fifth inning. Mets manager Mickey Callaway then came out of the dugout to make a lineup change, and Wright began his slow walk off the field.

You played the game the Wright way. We love and respect you. Forever #OurCaptain! pic.twitter.com/WvA3XPZO31

As fans cheered for about 3 minutes, 15 seconds, Wright saluted them by touching the bill of his cap and patting his chest repeatedly.

His stellar career cut short by injuries, the 35-year-old Wright completed an arduous comeback by returning to the majors this week for the first time since May 27, 2016. Unable to overcome his physical setbacks, he said he expects Saturday to mark his last big league game.

Jose Reyes posted a tribute to his longtime friend and teammate on Instagram:

Former Mets outfielder Curtis Granderson tweeted that David Wright was one of the reasons he wanted to sign with the Mets:

Most people don’t know that #DavidWright was one of the reasons I signed with the @mets in ‘13. I believed in his vision as the team Captain & wanted to play w/one of the greatest leaders this game will ever know. Thanks for the memories bro, it was an honor to be your teammate! pic.twitter.com/zoNGD4KO99

In honor of #OurCaptain, I do hereby proclaim Saturday, September 29th, 2018 in the City of New York as David Wright Day. pic.twitter.com/qxD6RYQERR