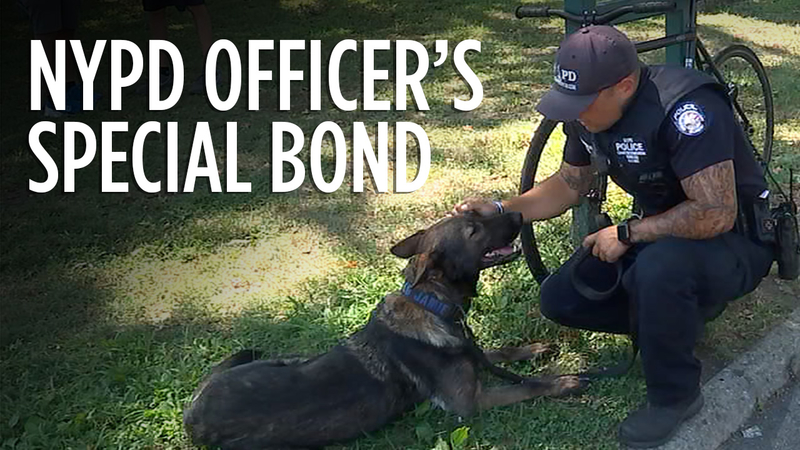 FLUSHING, Queens (WABC) -- The bond between an NYPD officer and his K-9 partner continues to grow stronger every day.

"Pretty much every day, all day together. I never had a bond like this before," NYPD Officer Michael Cautillo said of his K-9 partner Jamie.

That special bond is clearly evident as they work together sweeping through the crowds at the U.S. Open Tennis Tournament. They are part of the NYPD's Counterterrorism K-9 Unit.

"For a successful canine team, there has to be a very, very good and strong bond together. You almost feed the energy off of each other," he said.

But it wasn't until they were paired together in April that Cautillo surprisingly learned that Jamie was named in honor of his uncle, Det. James Albanese.

"Being named after my uncle, I feel even more so connected to her. And I feel like it helps our capabilities at work even more," he said.

Tim Fleischer has more on the bonded NYPD officer and his K-9 partner keeping the U.S. Open safe.

Det. Albanese joined the force in 1987. Cautillo remembers, "My uncle was very, very dedicated to this job. He always wanted to do this job since he was a kid."

After 9/11, he, like many others, spent countless hours with recovery efforts at Ground Zero. He was later diagnosed with a cancer-related illness and he died in 2014.

"I used to talk to him about it all the time. He loved being down there. He loved helping people," Cautillo said.

Jamie is part of new canine technology in the NYPD known as Explosive Odor Pursuit and is trained on nine explosive components.

"When she eventually finds the explosive, she will indicate on it. She will let me know exactly where it is by staying with the odor," Cautillo said.

And she loves her work.

"Everybody wants to greet her. Meet her. Pet her. She loves being around people and she loves being in front of the camera just like my uncle," Cautillo said.

He believes his uncle would be proud of Jamie.

"Since the first day I called her Jamie, she took to the name right away. It was surprising. It was like she was meant to have the name Jamie," he said.

And a very strong family bond.