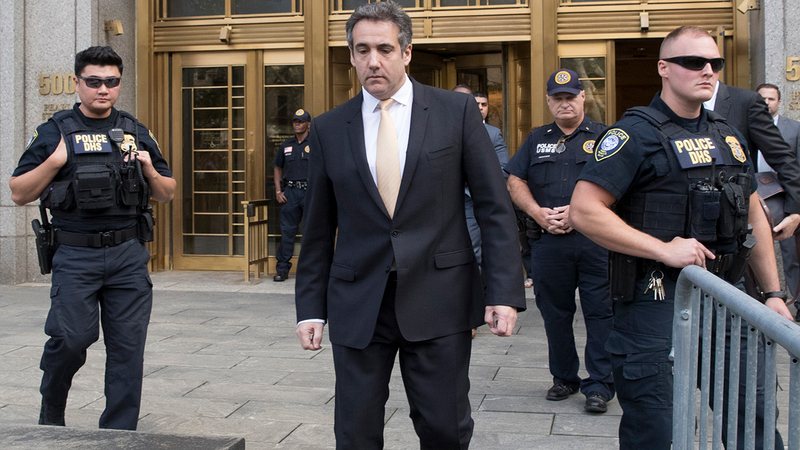 Cohen's account appears to implicate Trump himself in a crime, though whether - or when - a president can be prosecuted remains a matter of legal dispute.

Cohen's plea follows months of scrutiny from federal investigations and a falling out with the president, whom he previously said he'd "take a bullet" for.

FBI raids in April sought bank records, communications with Trump's campaign and information on payments to Daniels and McDougal.

Both women claimed Trump had affairs with them, which he denies.

The deal required Cohen to plead guilty to several felony charges of bank fraud, tax evasion and violations of campaign finance law, ABC News reports according to sources with knowledge of the deal.

The tax charges stem from Cohen's personal business dealings and investments in real estate and the taxi industry.

The campaign finance violations, however, are associated with Cohen's role in alleged hush money agreements with Daniels and Karen McDougal, who claim to have had affairs with Trump, according to sources briefed on the agreement.

Cohen was Trump's longtime personal lawyer until weeks ago. He was seen going into his lawyers' offices early Tuesday.

Prosecutors had been investigating Cohen for possible fraud related to his businesses for months. The FBI raided his hotel room, home and office on April 9, seizing more than 4 million items.

Cohen's relationship with Trump dates to the mid-2000's after Cohen, who owned condominiums in multiple Trump buildings in New York, took Trump's side in a legal dispute with the condo board at Trump World Tower on Manhattan's East Side. Cohen eventually went to work for the Trump Organization, where he held the positions of executive vice president and special counsel to Donald J. Trump.

Cohen had gained notoriety as Trump's loyal "fixer" before the FBI raid. And Trump branded it "a witch hunt," an assault on attorney-client privilege and a politically motivated attack by enemies in the FBI.

But the president's initial support for Cohen has since degenerated into a public feud, prompting speculation that, to save himself, Cohen might be willing to tell prosecutors some of the secrets he helped Trump keep.

Information from ABC News and The Associated Press