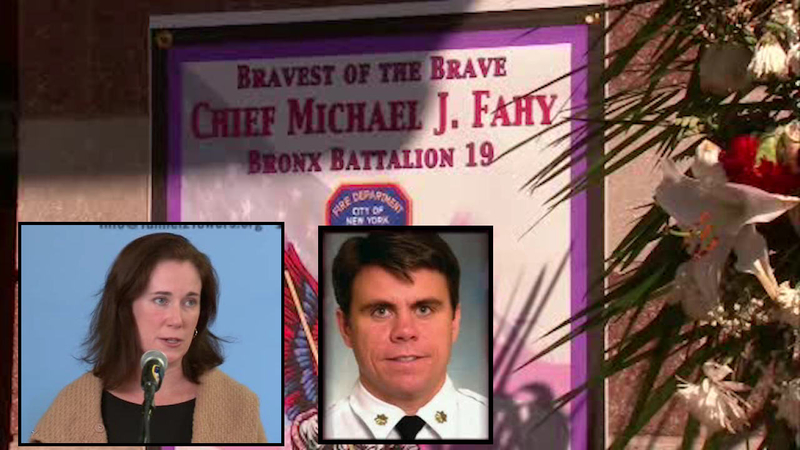 NEW YORK (WABC) -- A fallen FDNY deputy chief was honored with a fundraising campaign at his former firehouse Thursday.

Battalion 19 remains lined with flowers, the vehicles already memorialize their fallen chief and kindergartners come to pay their respects.

"The loss of our Mike is a nearly unbearable tragedy," Fiona Fahy said.

She stood at a podium and fought through the tears, a widow of just nine days.

Last week, FDNY Deputy Chief Michael Fahy was killed a house explosion in the Bronx, and Thursday morning his widow spoke about the loss and thanked New Yorkers.

This is completely awful but unique opportunity to witness the very best in humanity, this has actually helped us," Fahy said.

She plans to pay it forward by announcing her support for "The Stephen Siller Tunnel to Towers Foundation."

Fahy said she and her husband had recently watched a documentary on the 9/11 inspired charity.

"I just feel like this was a sign, this was what Mike wanted, and I am really happy to do something that he clearly wanted to do," Fahy said.

The foundation builds houses for seriously injured veterans like John Peck, a quadruple amputee who recently received a double arm transplant.
"There are veterans coming home who have sacrificed just as much as my husband did, you know, and are maybe not having 10,000 people come to their funeral," Peck said.

Like it has for other fallen first responders, the foundation reached out to help pay the Fahy's mortgage.

But Fahy had another idea.

"I mean, I can't put into words. What an incredible human being, what an unbelievable gesture," said John Hodge, of the Tunnel to Towers Foundation.

100-percent of the money raised in Michael Fahy's name will go to the building for America's Bravest Program.