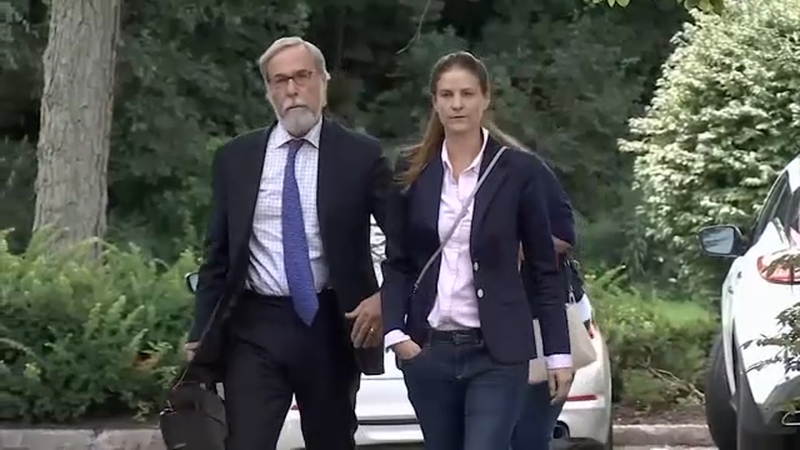 NEW CANAAN, Connecticut (WABC) -- The girlfriend of Jennifer Dulos' estranged husband has surrendered to state police in Connecticut in connection with the missing mother's disappearance.

Michelle Troconis, 44, turned herself in to police on Thursday on a charge of evidence tampering, the day after her boyfriend, Fotis Dulos, was arrested for a second time in connection to the case.
EMBED More News Videos

Diana Rocco reports on the arrest of the estranged husband in the Jennifer Dulos case.

Jennifer Dulos, 50, was last seen driving a 2017 black Chevrolet Suburban shortly after dropping her kids off at school in New Canaan on May 24. The couple had been embroiled in a contentious divorce battle.

Troconis was interviewed twice after the mother of five's disappearance in May. She was described by state police as less than forthcoming during those interviews.

On Aug. 13, Troconis was interviewed a third time and admitted to state troopers that her first two interviews with them were untruthful and she was ready to be fully truthful, according to court documents.

She told police she saw Fotis Dulos on the afternoon of May 24 cleaning what he said was a "coffee spill" in a red Toyota Tacoma. But she said it did not smell like coffee. She said she put one "coffee stained" paper towel into a black garbage bag.

Troconis identified herself and Fotis Dulos on surveillance footage that showed him discarding similar looking black garbage bags in trash receptacles on Albany Avenue in Hartford. She said she didn't know what he was doing during those 30 minutes because she was on her cellphone.

A few days after attempting to clean the truck, Troconis was captured on surveillance video following Dulos to a car wash in Avon where he had the truck washed and detailed. She initially denied she was there until she was shown video surveillance of her following him in the Tacoma to the car wash.

Troconis was asked by investigators why she thought Dulos was washing the car.

"Well obviously...all the evidence says because...you showed me the picture of the blood in the door, it's because the body of Jennifer at some point was in there," she told police according to court documents.

A major discovery came Aug 3., when investigators found handwritten "Alibi Scripts" in Dulos' home office in Farmington that appear to detail their activities on May 24 and 25. Troconis said that she and Dulos wrote the notes to "help them remember" their actions on these dates.

But under later questioning, Troconis admitted the "scripts" included information that was false.

"Our hearts go out to Ms. Troconis. We are confident that she will, in the end, tell the truth at trial. The state is a terrifying enemy, but a clean conscience is a powerful ally."

Traconis posted bond $100,000 Thursday and was released from the state police barracks.