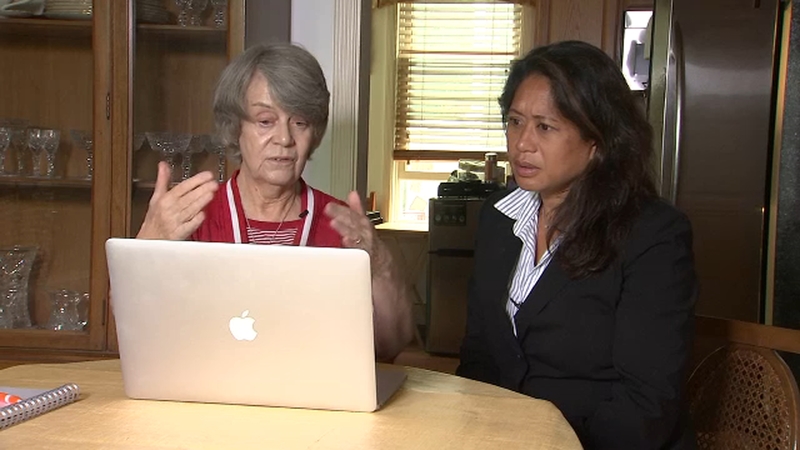 A Westchester woman was targeted by scammers who claimed to work for Microsoft. Police in Yonkers said they hacked into her laptop, and then, for the next 48 hours, ordered her to send them thousands of dollars.

As the mother of a police officer and wife of a security guard at Madison Square Garden, Jean Reilly said she was browbeating herself, in hindsight, for not seeing this swindle clearly.

She was conned into sending $10,000 in gift cards, not once, but twice to scammers.

Politopoulos warned how the one-two punch put a knock out on this senior's savings.

It starts with a simple phone call, which misleadingly displayed "Microsoft from Redlands California" on caller ID.

Somehow, the hackers compromised her laptop and computer's camera. Police said they were either used social engineering or an actual virus to gain access to her computer.

At one point, the suspects were even spying on Reilly's cat through her webcam!

"(The scammers remarked,) 'You have a cute cat.' He was looking through our webcam, yes," Reilly said.

Then came tall tale. The conman said Microsoft owed HER money, more than a grand, for her computer. They told her to punch that amount into her computer.

But the scammer told Reilly that she made a mistake typing in her own phony refund, adding an extra zero to the amount. So the scammer convinced Jean she should re-pay the difference, $10,000, ASAP.
Over the next two days, she was busy buying gift cards to repay the bogus debt.

She spent $10,000 on Google Play, Apple and iTunes cards. The hackers even displayed a spreadsheet for her to type in the numbers and show them the money.

"He asked you to scratch the back and hold it up to the camera," Reilly said.

The scammers didn't stop there. They told Reilly that some of the cards didn't work and convinced her to send another $10,000 through her debit card. The grand total of this scam? $20,000.

"At the end of the day, they all want the same thing," Politopoulos said. "They want your money."

After the $20,000, the scammers asked for a bank transfer, but luckily Jean stopped herself from sending even more of her life savings.

Here's the big takeaway: If you get an unsolicited phone call, hang up. Remember phone numbers can be masked to show anything the callers wants.

If your computer has been hacked, you need to run security software and change all of your password, especially for banking.

And never pay in gift cards for someone claiming you won a prize or a grant.

If using the app, click here to send us a news tip
Report a correction or typo
Related topics:
personal financeyonkerswestchester countycomputers7 on your sidescam
Copyright © 2021 WABC-TV. All Rights Reserved.
7 ON YOUR SIDE
Evictions threatened over Halloween decorations in NJ town
NJ storage customers fighting to get items from Ida-flooded units
Warning: Don't fall for scam involving bank/Zelle cash transfer
NJ storage customers will be allowed in their Ida-flooded units
TOP STORIES
Anti-vaccine protest outside Barclays Center turns chaotic
James Michael Tyler, known for 'Friends,' dies of cancer
Fight between 2 knife-wielding homeless men spills into NYC pizza shop
AccuWeather Alert: Downpours and gusty winds
Alcohol shortage looms: 'They don't know what's coming'
Woman found stabbed to death on the front lawn of her LI home
Suspect arrested in assault on 11-year-old girl in NYC park
Show More
Combatting crime front and center on campaign trail for NYC mayor
Ed Sheeran has COVID, will do performances from home
2 children dead as drag racer plows into spectators
Film crew voiced safety concerns before Alec Baldwin fired prop gun
Let computers do it: Film set tragedy spurs call to ban guns
More TOP STORIES News
Send us your questions, issues, and story ideas to Nina by filling out the form above, by emailing 7OnYourSideNina@abc.com, or contact Nina on her Facebook page or tweet her at Twitter @7OnYourSideNY! You can also call the 7 On Your Side Hotline at 917-260-7697.