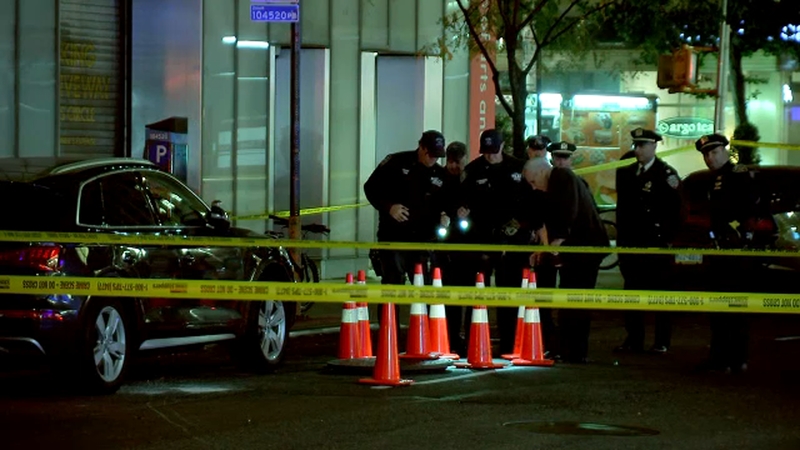 MIDTOWN (WABC) -- Surveillance video revealed that the man whose body was found in a Manhattan manhole may have drunkenly stumbled and fallen to his death.

A Verizon crew made the gruesome discovery Tuesday morning when they were overcome by a strong smell the moment the cover was lifted.

The crew had pried off the 200-pound manhole cover on 58th Street between Eighth Avenue and Broadway in the early morning hours. The shaft houses mostly telephone wiring and has no other access than the manhole cover, officials said.

Detectives investigating the man's death found surveillance video from September 30 that shows an apparently drunk man stumbling over barricades and disappearing from the camera's view.

No workers were in the immediate area when he apparently fell, and the manhole was covered about two hours later, officials said.

When found, the body was in an advanced state of decomposition and has evidence of being eaten by animals. This will complicate determining whether there was any other trauma, but at this time, this death appears to be an accident.

The victim is believed to be a middle-aged homeless man. Detectives will check missing person reports to see if anyone matches. The Medical Examiner will determine the cause of death and perhaps the man's identity.

The workers say lifting a manhole is a two-man job due to the cover's weight and the tool required to open it, so they wondered how in a very busy part of town the body could have ended up below ground with the manhole cover put back on.

By mid-morning, Verizon crews were still pumping fresh air into the shaft so they could eventually work there.

James Jones, a homeless man who saw it all happen, can't help but wonder what happened to the man.

"They say he was a homeless man," he said. "We got to be careful out here. You see what happened a couple of days ago with the homeless."