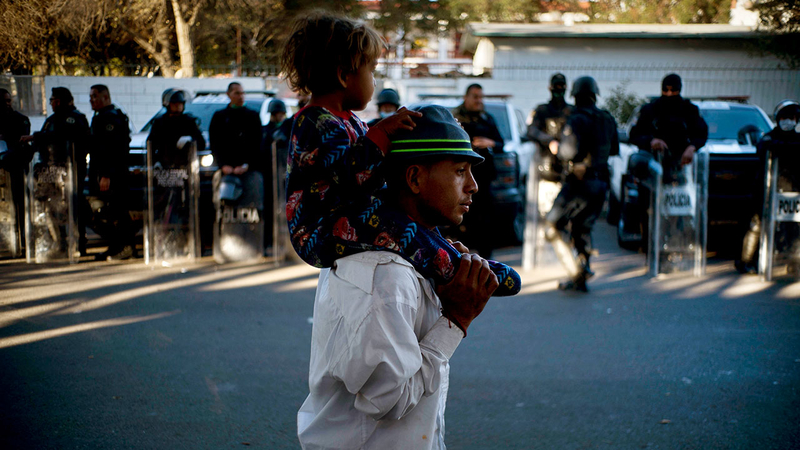 TIMELINE: The migrant caravan and the border controversy

As another large migrant caravan reaches the U.S. border, here's a timeline of the controversy this year.

APRIL 2018: As one caravan of hundreds of asylum seekers made the trek through Mexico, the immigration debate received renewed attention in the U.S. For anyone entering illegally, then-Attorney General Jeff Sessions directed U.S. attorneys in southwestern states to prosecute all cases, citing a "zero tolerance policy."

APRIL AND MAY: The crisis drew public attention as children were separated from the adults they were traveling with after entering the country illegally. As of Nov. 24, about 14,000 immigrant children are detained in more than 100 facilities nationally, according to the Associated Press. This number includes those who crossed the border without their parents.

JUNE: As the separations continued, White House Press Secretary Sarah Sanders said that the president was "simply enforcing" existing laws. Secretary of Homeland Security Kirstjen Nielsen stated that the administration did not have a policy of family separation.

Amid the controversy, TIME Magazine published a cover that photoshopped a young girl crying with the image of Donald Trump looming over her. On Twitter the organization asked, "What kind of country are we?"

TIME’s new cover: A reckoning after Trump's border separation policy: What kind of country are we? https://t.co/U4Uf8bffoR pic.twitter.com/sBCMdHuPGc

The girl's father then clarified that she was not among the children who were separated from their parents at the border, but the photographer defended the use of the photo as a symbol of the crisis.

In late June, the president signed an executive order aimed at keeping families together. The president said in October that he would consider implementing a new separation policy.

OCTOBER: Another Central American migrant caravan, made up of thousands of people seeking asylum, crossed into Mexico. The group headed north, prompting the president to order thousands of troops to be sent to the U.S.-Mexico border. Other, smaller groups formed behind it.


NOV. 23: After the caravan arrived in Tijuana, Mayor Juan Manuel Gastelum declared a humanitarian crisis, saying his city of 1.6 million was struggling to accommodate the influx of people.

NOV. 25 A group of about 500 people attempting to cross the border illegally clashed with US Customs and Border Protection agents, who used tear gas on the crowds. Though the migrant group was mostly men, some women and children said they were standing by the border and not attempting to cross when they were also hit by the tear gas. The port of entry in Tijuana was closed and re-opened on Sunday night.

NOV. 26: The president suggested in a tweet that he would close entry to the U.S. from Mexico "if need be."

Mexico should move the flag waving Migrants, many of whom are stone cold criminals, back to their countries. Do it by plane, do it by bus, do it anyway you want, but they are NOT coming into the U.S.A. We will close the Border permanently if need be. Congress, fund the WALL!

The border remained opened on Monday, but President Trump asked those seeking asylum to stay in Mexico while their requests were processed, which could take several months.