AP
By Laurie Kellman and Zeke Miller
WASHINGTON -- Vice President Mike Pence is denouncing violence in American streets but not acknowledging the Black people who have been injured or killed by law enforcement.

In his speech to the Republican National Convention of Wednesday, Pence brought up the violence that erupted in Kenosha, Wisconsin, following the shooting by police of Jacob Blake.

On night two of the Republican convention, First Lady Melania Trump made the case for four more years for her husband, and two of Donald Trump's children painted a Joe Biden victory as a disaster for the U.S.

A white 17-year-old police admirer was arrested earlier Wednesday on suspicion of first-degree intentional homicide after two people were shot to death during a third straight night of protests in Kenosha over Blake's shooting.

Blake was shot in the back seven times on Sunday as he leaned into his SUV, three of his children seated inside. His family says he is paralyzed from the waist down.

Speakers from night 2 of the 2020 Republican National Convention: VIDEOS (1 of 32)

Pence, accepting the GOP nomination for vice president, said, "The violence must stop, whether in Minneapolis, Portland or Kenosha." He added, "We will have law and order on the streets of this country for every American of every race and creed and color."
During his keynote address, the vice president also addressed Hurricane Laura and said people in the path of the storm should heed warnings about the strength of the storm and he pledged the Trump administration's help.

He said, "Stay safe and know that we'll be with you every step of the way."

Pence spoke at Fort McHenry in Baltimore, Maryland, as he "humbly" accepted the GOP's nomination for vice president at the Republican National Convention. It was not clear until just before he took the stage that he would address the looming Category 4 hurricane.

The strengthening storm menaced Texas and Louisiana along the Gulf Coast, raising fears of a 20-foot (6-meter) storm surge that forecasters said would be "unsurvivable." Authorities implored coastal residents of Texas and Louisiana to evacuate, but not everyone did before winds began buffeting trees back and forth.

The president, first lady, Pence and Pence's wife stood on stage with their hands over their hearts as country music star Trace Adkins performed "The Star-Spangled Banner."

Trump didn't make any comments at the podium, but after the national anthem, he and the first lady greeted people in the audience, chatting with supporters while standing a few feet away.
Report a correction or typo
Related topics:
politicsvice president mike pence2020 presidential electionrnc 2020
Copyright © 2020 by The Associated Press. All Rights Reserved.
VICE PRESIDENT MIKE PENCE 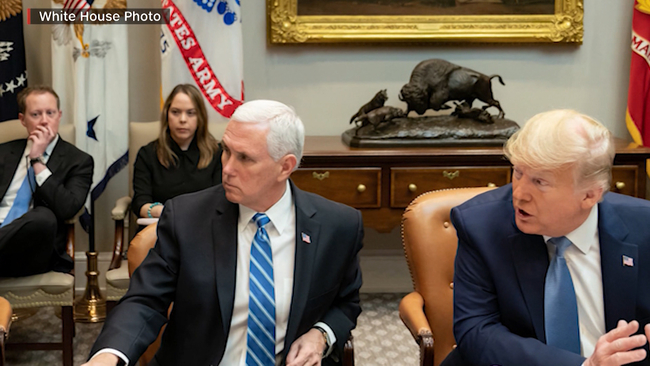 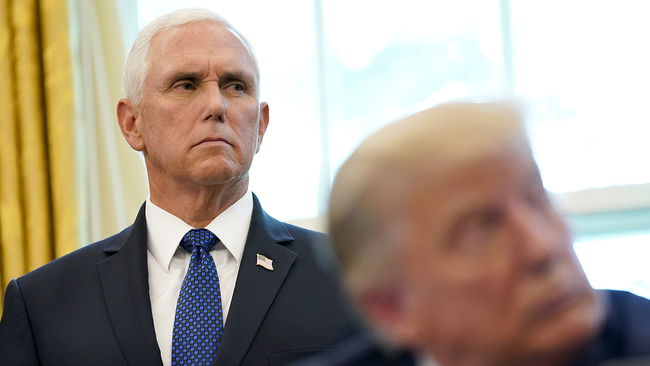 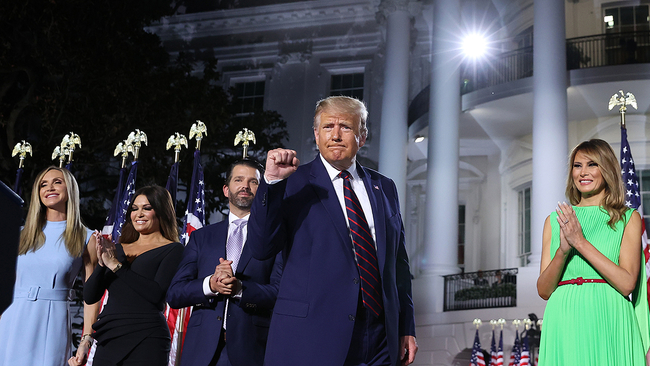