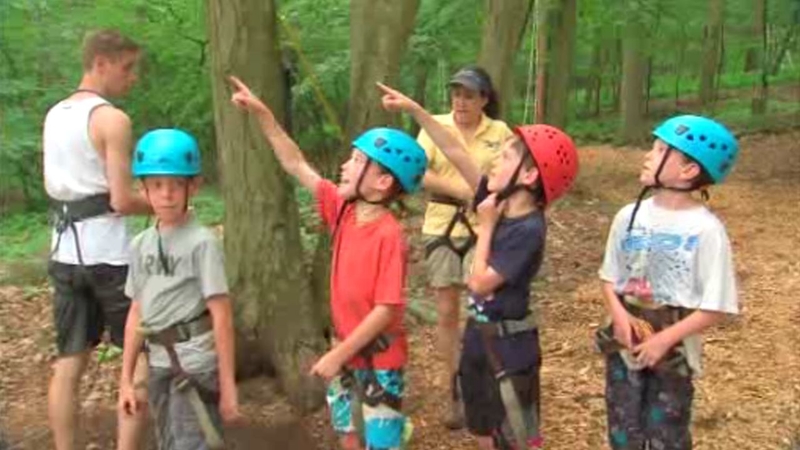 RANDOLPH, New Jersey (WABC) -- Summer is a time to relax from school and have some fun, but for quadruplets from a grieving military family, it is a time for adventure at Camp Tamarack.

Conner, Ethan, Braden and Joshua are two sets of identical twins who make up "the quad." They have spent the past few weeks at Camp Tamarack, but the boys are facing heartache after their mother passed away just seven months ago.

"She lost her battle with an illness in December," the boys' father, Chris Auclair, said. "So it's just the five of us now."

Auclair is a military battalion commander based at Fort Stewart, Georgia. Before that, he served in Afghanistan. Even while he was overseas, though, Auclair was trying to hold his family to together through his wife's illness. His son, Conner, is a two-time cancer survivor.

"We thought we beat it, and a year after we thought we had beaten it, it came back," he said. "But he's now been in remission for five years."

Camp Tamarack participates in Operation Blue Sky, a program that pays for summer camp for the kids of fallen police officers and firefighters. The boys' aunt reached out to the camp regarding her nephews' heartbreaking situation. The boys were welcomed, free of charge.

Camp officials say they were happy to have the sons of a man who serves our country while raising his children by himself.

"To be able to give the kids that gift, of helping them grow and try new things and becoming more confident," camp director Terry Castro said. "That's the first thing Chris said when he got here...'I can already see a difference in how confident my kids are.'"

The boys are having a blast, taking part in activities ranging from kayaking to zip-lining.

"The first time, I thought it would be scary," Joshua said. "But it's fun."