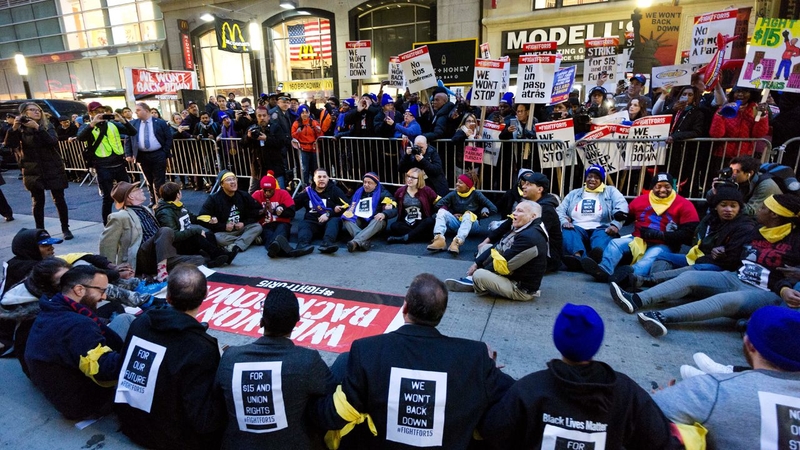 The workers marched between two terminals of the airport, which is run by the Port Authority of New York and New Jersey.

The Port Authority mandates that vendors and subcontractors who serve the airport pay their workers at least $10.10 per hour, but Newark Mayor Ras Baraka has called on officials to raise their minimum wage to $15 per hour at its facilities and take steps to hire more Newark residents.

The protest is part of a nationwide campaign for higher hourly wages, including for workers at other airports and fast-food restaurants. About 26 demonstrators were arrested after they linked arms and sat on a Lower Manhattan street Tuesday morning.

Councilman Brad Lander was the first protester to be taken into custody, and other arrests followed as Fight for $15 protesters sat and blocked traffic in front of a McDonald's at 160 Broadway "to protest unfair labor practices."

There were about 350 people at the peaceful rally.

The workers were from fast-food chains and nearly 20 airports as part of a National Day of Action.

Participants chanted "We shall not be moved," while signs read "We won't back down" and "Strike for $15 and our future."

It is the first such action since businessman Donald Trump won the U.S. presidential election.

Most of the 26 arrests Tuesday were for blocking traffic, although one was for disorderly conduct.

Protesters started at Zuccotti Park before heading to the airport "for a major rally and march to demand that Newark Airport workers aren't treated as second class citizens and are given a $15 minimum wage like their colleagues at New York airports."

Gov. Andrew Cuomo signed legislation last April that gradually raises the minimum wage to $15 in New York City by the end of 2018 and in some prosperous suburbs by the end of 2021. It will rise to $12.50 in the rest of the state by 2020, eventually reaching $15.