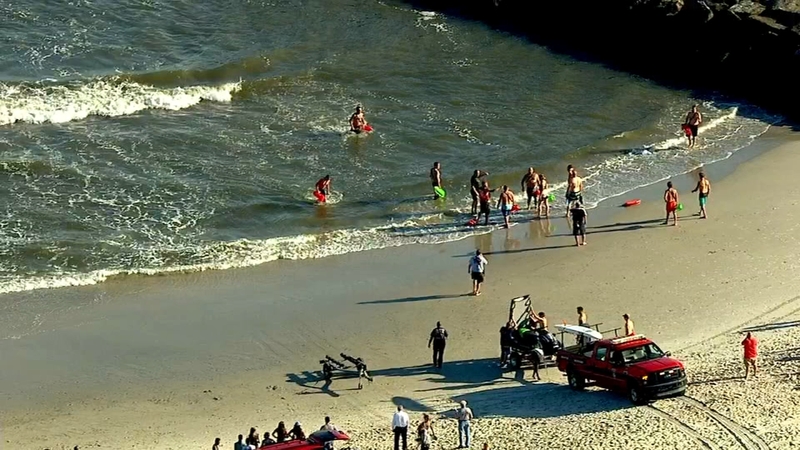 LONG BEACH, Nassau County (WABC) -- The Coast Guard search for a 10-year-old boy who went missing while swimming with his brother in the water off Long Beach was suspended Wednesday, as the current was too rough to continue. Local authorities will continue to scan the shoreline.

The boy had been swimming late Tuesday afternoon just off Riverside Boulevard when he disappeared. Police received several 911 calls for swimmers in distress.

The boy's 11-year-old brother was able to swim back to shore after becoming separated from his sibling. He was taken to South Nassau Communities Hospital for observation.

In the frantic moments after the boy told police his little brother was drowning, rescue workers formed a human chain.

"He was screaming so bad, he couldn't even talk, he was stuttering and everything," beachgoer Malaysia Maddox said. "We felt so bad. We were trying to tell him, 'Calm down, calm down, where's your little brother?' I didn't know what to do."

Maddox and her friends were on the beach when the boy came running from the water. She said he was terrified.

"He was like, 'my little brother's drowning,'" she said. "He left us and went to some other people, and no one was listening to him."

The girls called 911, and lifeguards went into the water with surfboards and jet skis. Nassau County police officers were also on the scene on a jetty.

Helicopters searched from above, while rescue boats combed the water and emergency service workers searched the cracks and crevices of the jetty.

The brothers, who are from Hempstead, took the bus to the beach alone without their parents.

Officials say there were no lifeguards on duty at the time. They begin their full-time duty on Friday.

The siblings went in right near the jetty, which lifeguards say is one of the most dangerous places.

"There are holes all over the place, you could be up to your knees and next thing you know you step down and go under and the current will take you right out," said lifeguard Paul Gillespie.

After about 45 minutes Wednesday, divers from Nassau County started drifting and had to get pulled out. The current was simply too strong.

Signs on the beach urge people to not get in the water when no lifeguards are on duty.