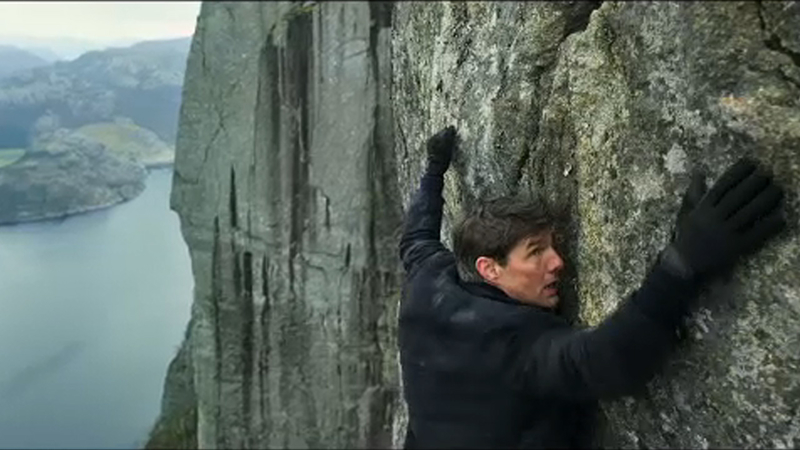 NEW YORK (WABC) -- "Mission: Impossible - Fallout" is being called the best night out at the movies so far this summer, getting a rare 98 percent approval rating on the Rotten Tomatoes website. I've seen plenty of four star reviews, but let's not get too carried away.

Watching Tom Cruise piloting helicopters, hanging from beneath them and racing around Paris on a motorcycle, not to mention parachuting out of a military plane, had me wondering -- isn't he getting a little too old for this sort of thing?

He may have been injured while jumping between buildings, but the star is determined to push the limits at the age of 56, and he certainly has the face of a much younger guy.

Maybe we should take our cue from one of his lines in the picture: "What's done is done when we say it's done."

Once again, the stunts are more important than the story.

"The audience can tell when something's been cheated, so it's important to do it all for real," stunt coordinator Wade Eastwood said.

The mission Ethan Hunt chooses to accept this time involves portable nuclear bombs, and his boss -- played by Alec Baldwin -- tells him, "You had a terrible choice to make: Recover the plutonium or save your team. You chose your team, and now the world is at risk."

On that team once again are Simon Pegg and Ving Rhames, and all of them must deal with the head of the CIA played by Angela Bassett. She has put her own man into the operation, because she just doesn't trust Cruise's character.

Making a bid for stardom in "Fallout" is Vanessa Kirby, who is so effective as the Queen's sister, Margaret, in "The Crown."

She's an arms dealer here, but she and others are not who they appear to be.

The story gets confusing after one double cross too many, but luckily, so much happens that the plot holes are not as obvious as the potholes.

So many stars claim to do their own stunts when they really don't, so Cruise deserves respect for the risks he's willing to take. The stunts are wild and crazy enough to make this movie worth the price of a ticket, but the hard-to-follow story just doesn't make much sense. And that's why my review is not a rave review.