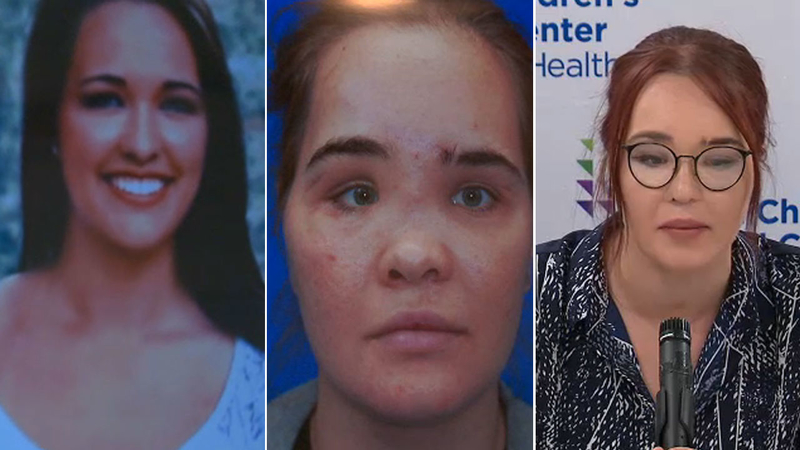 NEW HYDE PARK, New York (WABC) -- A 24-year-old former teen model has a message for others as she recovers from her 16th surgery to repair her face following a car crash.

Nicole Sincavage was involved in a bad wreck in March 2016 that left every bone in her face shattered.

After more than a dozen surgeries, she spoke out Wednesday alongside her surgeon at Cohen Children's Medical Center.

She cannot remember the accident itself or what even distracted her. Her car was totaled and she was left unrecognizable.

"When I found out I broke every bone in my face and I was a model - that was extremely difficult," Sincavage said.

Her entire face had to be rebuilt after her eyes were too far apart, her face was collapsed, her cheek bones stuck out and her jaw was misaligned.

At times, she found it difficult to leave home and suffered from anxiety, depression and PTSD.

Now, three years into her recovery, the photos of her reconstruction bring a smile to her face even though her emotional recovery continues.

"It's still difficult to look in the mirror sometimes because things aren't the same as they used to be," Sincavage said.

She wants to spread a message of positivity and compassion while helping to raise awareness on auto safety during what is often considered the 100 deadliest days of the year for young drivers -- Memorial Day to Labor Day.

Her message now to other young people going through difficult times is that everyone faces struggles in life, and the key to overcoming obstacles is to remain positive and hopeful.

"Life is a beautiful thing and I really have learned to appreciate that," she said.

Sincavage will study chemistry in the fall. She wants to go into the medical field to help others.