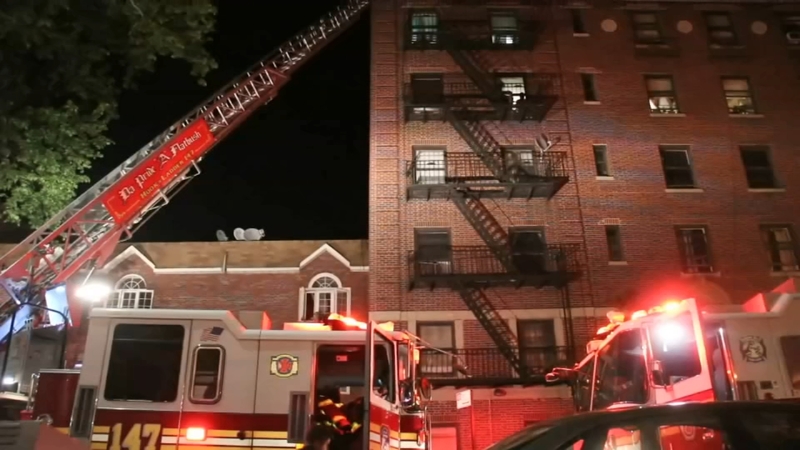 DITMAS PARK, Brooklyn (WABC) -- A woman and her adult son were killed in an early morning apartment fire in Ditmas Park, Brooklyn Wednesday.

Many people who lived in the building on East 22nd Street knew the mother and son.

They've been living there for decades and they left an impression on everyone in the building.

"It's heartbreaking to see a good person die just like that," said Brenda Joachim, a neighbor.

Neighbors are still trying to wrap their heads around what happened.

One minute they were sleeping, the next moment a loud noise.

"The boom, the big boom, I thought it was a bomb, I was like, oh my God," said Marie, a resident.

"I heard a boom, it woke me up and I went to my door," said Petr Antuyne, a resident. "I cracked my door, smoke was coming in and then I realized we had a fire."

Fire crews got a 911 call just after 2 a.m. Wednesday, and on the sixth floor found the fire, reported as a rubbish fire, in the hallway.

Many rushed to get out, but say the smoke was intense.

After getting the fire out, firefighters found a 59-year-old woman who was pronounced dead at the scene.

Fire crews pulled her 36-year-old son from the building and worked frantically to try to save him.

"I saw a stretcher and a guy being hauled off away they were doing some chest compressions," said Cartney St. Fluer, a resident.

He was rushed to the hospital, but didn't survive.

The mother and son are now gone, but were not strangers to their neighbors, who say they greeted everyone they saw.

"He's a nice guy, up to yesterday I see the guy and he told me said he would come Friday to do the ceiling fan for me," said Janet Glasgow, a neighbor.

"He a sweet person, he loved his kids dearly, his kids were his everything," Joachim said.

"She raised a great son, so she herself had to be pretty great," St. Fluer said.

Fire investigators are still working to determine the cause.