3-year-old boy killed, mom hurt after being hit by car in Manhattan 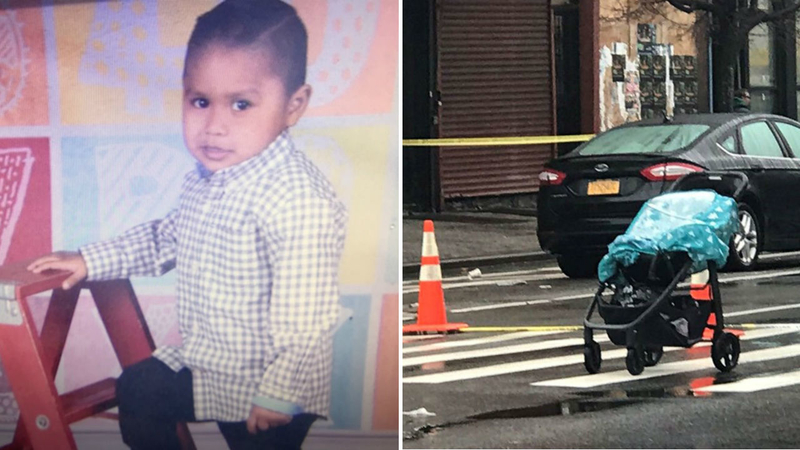 3-year-old boy killed, mom hurt after being hit by car

EAST HARLEM, Manhattan (WABC) -- A mother and her 3-year-old son were hit by a vehicle while crossing an intersection in East Harlem Monday morning, killing the little boy.

The 25-year-old woman was pushing a stroller and the boy was carrying a small umbrella. They were rushed to Metropolitan Hospital, where Bertin Dejesus was pronounced dead. His mother suffered minor physical injuries.

It happened at First Avenue and East 116th Street just after 9:30 a.m., with the stroller left sitting in the roadway.

Police say a blue Ford F-250 operated by 59-year-old Jaime Sabogal, of Yonkers, was traveling eastbound on East 116th Street when it made a left turn onto northbound First Avenue and struck the stroller. The baby reportedly went under the truck in what witnesses said was truly horrific and will forever haunt them.

"I saw her sitting on the floor holding the baby," witness Jose Reyes said. "The baby was bleeding a lot. So she was in shock...It was really heartbreaking to see her, you know, just laying there with the baby. She couldn't do anything. He's bleeding crazy."

Sabogal initially continued driving, perhaps unaware of what happened, but he was quickly flagged down by passersby. He ran out of his truck and was said to be in tears at the scene.

Surveillance camera video obtained by Eyewitness News showed the accident. The pickup truck turned left onto First Avenue, and the driver apparently didn't see Bertin carrying the umbrella as his mother pushed his empty stroller into the crosswalk.

Witnesses said the mother was frequently in the area.

"She's an old customer of mine, she comes here every day, her, her child and her friends," said Marisol Medina, a Dunkin Donuts worker. "She was here, she drank coffee. She said to us, 'See you later.' She was speaking Spanish. She said, 'Goodbye.' And then I hear the guy, I was with a customer, he always hangs out with us here, said, 'Oh my God, they hit the baby.' I said, 'What baby?' And it was her and her child...The thing was, the baby was right under the truck."

Sabogal was driving with a suspended license at time of the crash and was taken into custody. He is charged with third-degree aggravated unlicensed operator, failure to yield to a pedestrian and failure to exercise due care.

"He was hitting himself on the head, like he didn't really mean to do it, like he couldn't believe it," Medina said.

A business owner who has a surveillance camera here said that the driver drove away at a normal speed after the collisions and that the fact he did not speed away seemed to indicate he didn't know what had happened.

Medina said she thought the driver was unaware.

"He was crying, he was banging on the car," said Adrian Cruz, a nearby bodega worker.

Witnesses were distraught by the scene.

"How do you think I feel? I have a 2 1/2 year old at home. This could be my kid," witness Joe Alfredo said. "It hurts. It hurts everybody right now."

Bertin is the sixth child to die on New York City streets this year, and some say more has to be done.

"Drivers should only have the option to make a right as much as possible," said New York City Councilman Ydanis Rodriguez.

The idea is to prevent motorists from turning left onto a street when there might be pedestrians in the crosswalk.

"The light signal is organized in a way that when drivers have the light, the pedestrian doesn't have the option," said Rodriguez.

The city has already put this system in place in some intersections.