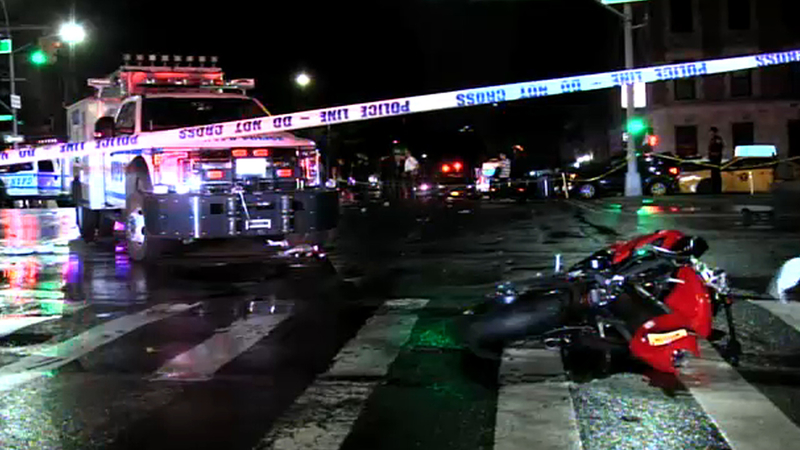 UPPER EAST SIDE, Manhattan (WABC) -- A man was killed and a woman was injured after their motorcycle slammed into a police truck on the Upper East Side.

The incident happened around 10:30 p.m. Monday at the intersection of Park Avenue and East 96th Street.

The Emergency Service Unit truck was responding to a call of an officer with chest pains and was heading eastbound on east 96th.

According the NYPD, the truck had its lights and sirens on when the motorcycle T-boned the ESU truck.

The 32-year-old motorcyclist, later identified as Dmitry Kovalenko, was killed.

The force of the crash sent a woman riding on the motorcycle underneath the ESU truck. She was rushed to the hospital.

Both people on the motorcycle were wearing helmets, but witnesses say they could immediately tell that someone was seriously hurt.

"You see one wheel out front and the rest of the body of the motorcycle about 20 feet away, it's just a brutal scene, the helmet is away from everything," said Eric Kanter, a witness.

The passenger is expected to survive and the officers in the truck were not injured.