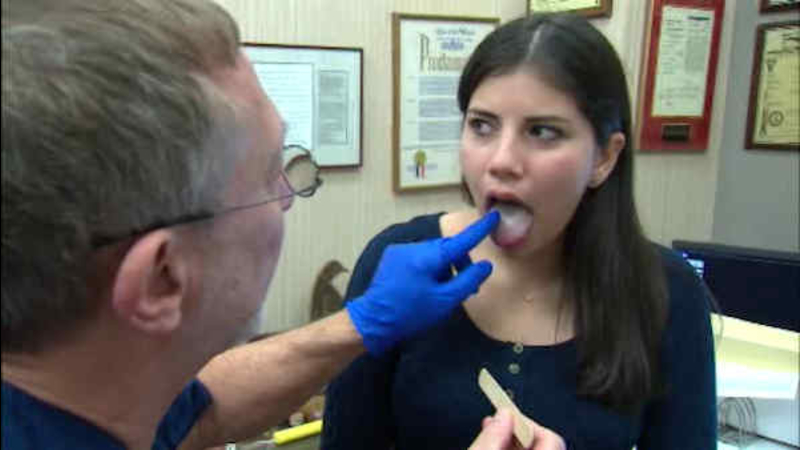 Jenna Goerke wants to sing for a living, but she had what could be a career-ending problem with her tongue -- an artery and vein tangle called an AVM that makes it harder to even talk, let alone belt out a tune.

Now, that tangle is gone.

"Oh my God, it's insane," she said. "It was amazing to come back from first surgery and know that I can eat and drink and sing, and there's a good chance it won't bleed."

Earlier this week, that AVM started bleeding, and Mount Sinai neurologist Dr. Alejandro Berenstein did a procedure he pioneered, snaking a catheter through her groin up an artery to find and plug the leaking blood using a sort of glue.

"After my first surgery, I noticed how much thinner my tongue felt," she said. "And Dr. B was like, 'Yeah, that's how most tongues are.' I'm like, oh, I always thought tongues were usually just this thick."

Goerke, who lives in Plainview, just received a nearly full scholarship to Temple University, where she plans to study music theory. And thanks to Mount Sinai's surgical team, she can now sing herself all the way to Broadway. And the doctor better get good tickets.

"For a while, I considered not going into music at all," she said. "But honestly, I would be miserable if I didn't go into music, because it's just my passion in life. And now, it's good to know going in that I can do this, even though I have this condition.
Related topics:
health & fitnessplainviewsingingsurgery
TOP STORIES
AccuWeather Alert: Messy morning
Deadly Bronx house explosion caught on camera
Supreme Court allows Jan. 6 committee to get Trump documents
School Closings
Find out which schools are closed in your district.
Watch NatGeo documentary 'The First Wave' free for 48 hours
Cardi B offers to pay for funerals of all 17 Bronx fire victims
Starbucks no longer requiring US workers to be vaccinated
Show More
Local twins semi-finalists for one of the top science prizes in U.S.
Times Square subway shove suspect ordered held without bail
Third teen sentenced in murder of Barnard student Tessa Majors
Rescue captured on bodycam video after 3 break through thin ice
French actor Gaspard Ulliel dies after ski accident
More TOP STORIES News