MOUNT VERNON, N.Y. (WABC) -- An overnight fire tore through a Mount Vernon strip mall early Monday, destroying several homes and businesses, and fire officials can't even begin the search for a cause until they can cool the smoldering rubble and pull out debris. 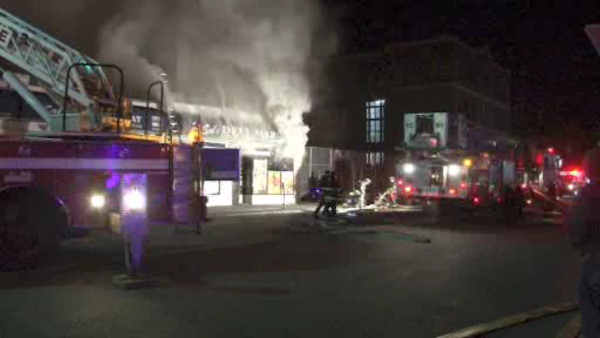 PHOTOS: Mount Vernon fire
A stubborn fire burned through a row of stores and caused an apartment building collapse early Monday in Mount Vernon.
But for residents in the area, the aftermath is devastating.

"A bad loss, I would say, A very bad loss," resident Denise Jones said. "It's a shame."

What Jones sees now are five viable businesses lost, as well as the apartments above that housed about a dozen people.

"I didn't smell anything," she said. "I didn't see anything. Come outside, and this is what I see now. It's a shame, a shame."

"We had tremendous smoke pushing out," Deputy Fire Chief Tom Duffy said. "Intense heat in the basement, and it ran right across the roof to the other stores."

And within an hour, the two stories of apartments collapsed into the stores and continued to burn. The residents were able to safely escape, but they lost everything. Yonkers and Pelham Manor firefighters also helped to battle the blaze.

"Upon arrival, very quickly, it went from a working fire to a three-alarm fire," Chief A.J. Everett said. "We just have a good idea that the fire started in the basement at the rear of Sal's Deli. But we haven't had our cause and origin team out yet to start their investigation."

Next door to the fire is Nelson Mandela High School, where power was shut off due the fire.

"We were called in just to make sure that everything is OK on that side," custodian Shaun Peterson said. "The building has been closed, meaning the school, due to the fire."

The owner of the building would not comment, so it's unclear if he is thinking of rebuilding. The loss of the businesses affects the neighborhood.

"Everybody in this whole area relied on Sal's Deli, Sal's laundry and the pizzeria and the Cleaners," Jones said. "It was very important."

Hyung Park, who owned the Fairbanks Dry Cleaning businesses for 29 years, is just glad no one was inside.

"Everybody is safe, thank God," he said.

He now thinks it might be time to retire. Others who frequent the businesses are now concerned about all those out of work.

"What about the people, the young girls behind the counter, stuff like that," resident John Jones said. "You go home Sunday night, and you don't have a job to come back to Monday morning. This is horrible. Horrible."

Once the smoldering rubble cools down, investigators may be able to get inside building and begin to look for a cause.