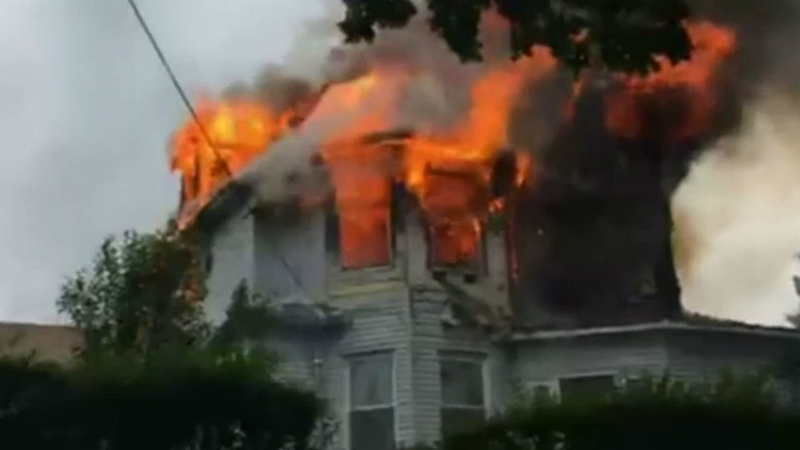 MOUNT VERNON, New York (WABC) -- A raging house fire in Westchester County forced an elderly man to escape out of a window, leaving the man injured along with a firefighter.

Cell phone video shot next door showed flames pouring through the windows of the house, and how quickly the inferno spread.

It was just after 8:30 a.m. Wednesday when the fire tore through the top two stories of a three-story home in the 400 block of East 4th Street.

Three people were trapped inside, rescued by firefighters. The most dramatic involved the homeowner, 83-year-old Jay Allen.

"One party was actually hanging out the window upon our arrival, an elderly gentleman," said Mount Vernon Fire Chief Al-Farid Salahuddin. "Fortunately by the time we got there we were able to rescue him."

The man actually dropped down from the window, his fall broken by a fireman. In the meantime, the task of putting out the fire was complicated by low water pressure in the area.
EMBED More News Videos

Marcus Solis reports on the dramatic rescue of a man from a house fire in Mount Vernon.

Three people were hospitalized, including Allen. His family says he has burns all over his body, but is conscious and is able to communicate.

Donna Arrington and her sister Jennifer Pauling surveyed what was left of their childhood home later in the day. And the shock set in.

"I'm just numb right now. I raised my kids here," said Arrington, who lived in the home with her son and father.

The fire was so intense and fast that Donna's 23-year-old son Matthew and his grandfather, Allen, the only ones at home, both jumped from the second floor.

" I heard he was dangling out of the window with flames above his head," said Jennifer Pauley from New Rochelle.

Allen is recovering with second degree burns at Jacobi Medical Center. "On his arms, on his calf, and his feet are just blood," says Pauling.

Matthew and a firefighter were also treated for injuries and are expected to be ok.

And while Donna and her son lost everything in the fire, .the focus now is the man the family calls "papa."

"He recognized me, he was able to tell me my cell phone number," said Pauling. The family says Allen will be in the hospital for weeks.

The investigation into the exact cause of the fire is underway. Officials are saying it's accidental.

The Mount Vernon Fire Department said the main reason the fire spread so quickly was because of the age of the house.

"It's very flammable if we're not careful and that's why a house like this, the age of the house, makes it very susceptible, so if you get a small fire it can just grow so fast," Salahuddin said.