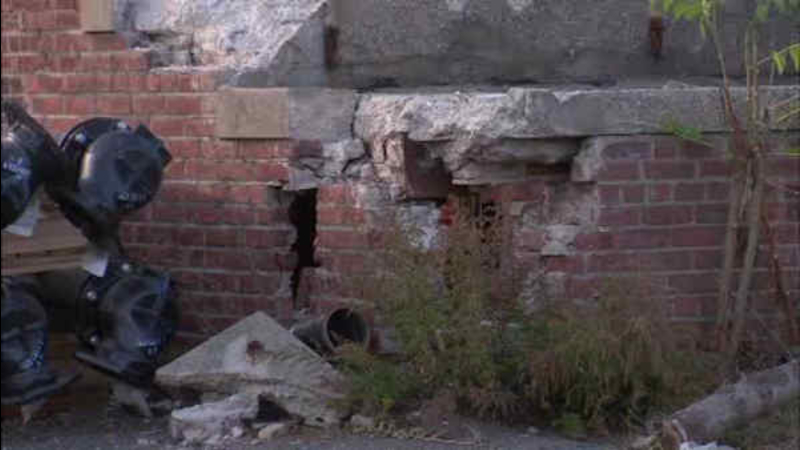 MOUNT VERNON (WABC) -- Generations of kids grew up on the field at Memorial Stadium in Mount Vernon, but an effort to bring it back to life that began six years ago is still no where near completion.

Now, Mayor-elect Richard Thomas is filing an injunction over the current mayor's handling of the project.

"We know we have to take back our field right now," Thomas said.

Newly elected, Thomas is already bringing a large crowd of supporters together at the crumbling ruins of Memorial Stadium and wading into to a long-awaited improvement project even before he is sworn into office.

Thomas and others filed the injunction to stop work at the site after seeing a large mound of dirt appear recently, work they claim was not called for in the open space design of the original project.

"Prevents and prohibits any kind of development consistent with the agreement between the county and the city of Mount Vernon," county legislator Lyndon Williams said.

Many like Chamber of Commerce president Dwayne Brown, who fondly spent his high school years playing football there in 1990s, see a frustrating pace to the project.

"There are certain things over the last seven years a whole generation has missed, has went away from them," he said. "So it's important to get it back."

Thomas said the last accounting from current Mayor Ernie Davis was that project is $5 million in the hole, and as he is about to take office, he wants to get a full accounting of the project.

"We are throwing good money after bad, so at the end of the day, we need to figure out where we are first," he said. "And once we do that, we will define our path forward."

"It is unfortunate that Westchester County Legislator Lyndon D. Williams, whose deliberate stalling of funds for Memorial Field was politically motivated, would be joined by Mayor-Elect Richard Thomas to continue the charade to get the public to believe that they now have a plan for Memorial Field.

"What is now clear, but was always suspected, is that together the Legislator and the City Councilman constructed a plan to prevent the completion of Memorial Field. I believe the public is tired of these shenanigans and brain drain.

"If the city has any hope of continuing the progress of this administration we must hold these two individuals accountable.

"The public must be reminded that the County released 3 million plus dollars of Legacy Funding before I came back into office, most of which was for consultants (architects, engineers and demolition). Even though the project's estimated cost showed that a new stadium could not be built with county monies solely through the Legacy Fund, demolition of the stadium was allowed without drama or objection and with the apparent acquiescence of Legislator Williams.

"Understanding as an architect that the Clinton administration was making a huge unpardonable mistake by tearing down the only iconic stadium in Westchester, which was built with the assistance of World War I veterans in the late 1920's, I stopped the demolition in order to preserve a sentimental community symbol. I, and a growing number of people, felt the stadium should not be summarily discarded but rather preserved.

"A junior architect on our Public Works staff, under my direction, drafted a new plan calling for the preservation of this local landmark. This was parlayed first to the City Council and Legislator Williams and ultimately to the County Executive. Everyone knew of my direction and agreed with our plans.
What we accomplished since I have been in office was on our own, without any new financial infusion from the county nor assistance from our elected County Legislator Lyndon Williams.

"Recreation Commissioner Darren Morton has helped manage the finances spent during this administration for the construction and completion of the tennis courts. He has kept in touch with Legislator Williams throughout this process and can provide details, including our face to face meeting with County Executive Rob Astorino and his staff in 2012, up to our last conversations with the County Legislator."