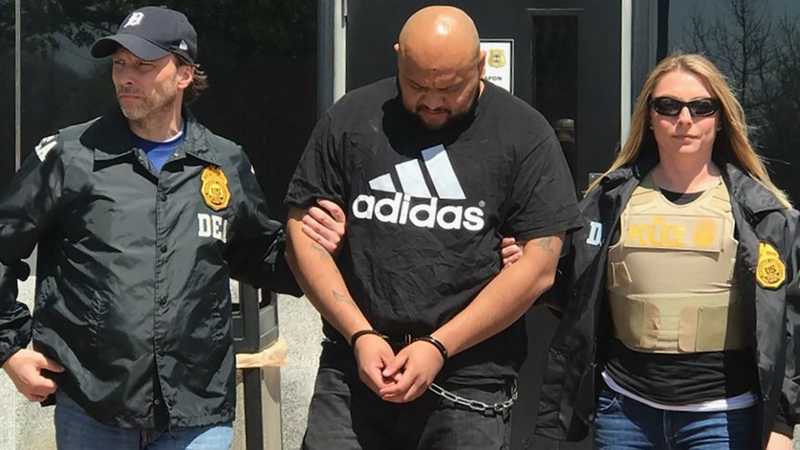 MINEOLA, Nassau County (WABC) -- Police on Long Island are investigating what they call credible threats to murder officers after the accused East Coast leader of the MS-13 gang was arraigned on murder and drug trafficking charges.

"MS-13 wants to threaten a cop in this county, MS-13 is going to get an answer," Nassau County Police Commissioner Patrick Ryder said.

Ryder said it is a fight that cops will not back down from. It started with a credible threat picked up by the Hempstead Police Department Wednesday afternoon to assassinate men and women in uniform.

MS-13 allegedly said, "Too many arrests. Time to take back the streets like we did in El Salvador." Officials say the threat was delivered to them by an informant.

"It will not be tolerated in this county against any of our first responders," said Ryder. "Whether it's law enforcement, our police medics, or our fire services. We will answer that threat, and we will answer it strongly."

Police say stemming from the threat, they have arrested several suspected gang members since Wednesday for other gang-related activities. But then police learned of a second threat against cops. That individual, they say, had weapons and masks.

Police across Nassau County are stepping up patrols and taking new precautions.

"We are doing everything we can to make sure that our police officers and all of our first responders are protected," Nassau County Executive Laura Curran said.

Police are still on the lookout for a man described as having a thin build and a tattoo made up of three dots next to his eyes.

Both Nassau and Suffolk counties have offered a $25,000 CrimeStoppers reward for information leading to an arrest of anyone threatening to harm a police officer.

It all comes on the heels of the arrest of 35-year-old Miguel Angel Corea Diaz, the alleged MS-13 East Coast kingpin. He was extradited from Maryland on Wednesday and faced a judge Thursday. He was included as one of 17 defendants previously cited in a 21-count Nassau County indictment that prompted authorities to do a local gang sweep on January 11.


Diaz had been held in Prince George's County Detention Center on local felony drug charges, with the Nassau County arrest warrant pending against him. He is due back in court on May 10 and faces up to 25 years to life in prison.

"This defendant, known as Reaper, allegedly ordered murders and trafficked large amounts of poisonous heroin up and down the eastern seaboard," Nassau County District Attorney Madeline Singas said. "What started as a narcotics investigation with the Drug Enforcement Administration quickly expanded in scope and geography to include murder and violence committed by alleged MS-13 members throughout the United States and El Salvador."

Singas said the seven-month investigation included police departments in New Jersey, Virginia, Maryland and Texas, where many of the arrests were made. It reportedly began as a narcotics trafficking investigation and went worldwide, and officials say gang members all over the world were taken down, including in places like Cuba, Korea, France and Egypt