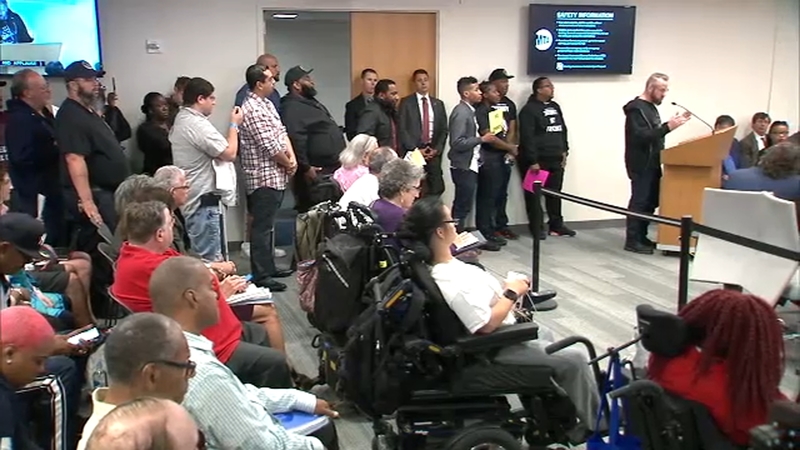 LOWER MANHATTAN (WABC) -- The MTA board approved a $51.5 billion 2020-2024 Capital Plan during a meeting in Lower Manhattan on Wednesday.

The plan is the largest capital plan in the MTA's history and provides a 70% increase to capital investments for subways, buses, Metro-North Railroad and Long Island Railroad for the next five years.

Eleven subway lines will be re-signaled beginning with the Lexington Avenue line and 2,400 buses will be added.

-NYC money can't be used as a crutch to delay implementing congestion pricing.
-NYC is calling for the completion of an audit to verify the costs of the plan.

-NYC priorities for improving rider experience must be addressed.
Most board members said it is the best capital plan by far and a huge investment into the future of the system.

There were hours of internal discussion and some skepticism from board members about implementation.
"New York City stands ready to contribute to an MTA capital plan, as it has done in the past. Under our administration, the City made the largest general capital contribution in history to the MTA's 2015-2019 Capital Plan at $2.66 billion and played a critical role in recent subway performance improvements by funding half of the Subway Action Plan," de Blasio said in the letter.

Foye released a statement reacting to the mayor's letter:

"While a fully funded Capital Plan would invest a tremendous amount of resources into our transportation system, I want to make it clear that much of those funds we'll receive from the Central Business District Tolling or other revenues are lock-boxed for capital projects. Without new funding resources for operations or cost cuts, we will continue to face significant financial constraints with forecasted deficits in future years. We're continuing to focus on our operating budget deficits and to find ways to reduce costs and balance the budget as statutorily required each year as we work toward the December financial plan."

The plan now moves to the Capital Program Review Board for final approval.

"I laid out my priorities for the MTA Capital Plan to the Board several weeks ago, including improving signal technology, increasing accessibility, addressing quality of life concerns, ensuring equity for LIRR and Metro-North Railroad, and upgrading bus service. This plan meets those priorities. The record level of investment by the State - including $25 billion secured during this year's legislative session and an additional State investment of $3 billion - is extraordinary, but after generations of the MTA being underfunded and mismanaged, it is necessary and will pay dividends for the future of the system. We have made much progress recently and now the Senate Leader, Assembly Speaker and Mayor of New York City must approve it in order to move forward."