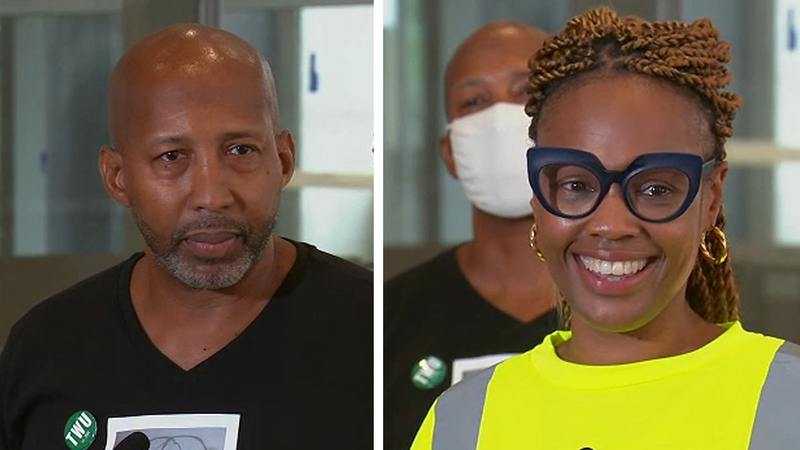 DOWNTOWN BROOKLYN, Brooklyn (WABC) -- Two MTA workers are being hailed heroes after their efforts in saving a man after he fell onto subway tracks as a train was barreling into the station.

The incident happened at the Metro-Tech station in Downtown Brooklyn Tuesday afternoon.

Roberto Ritcher helped save the 70-year-old, who was holding flowers and a balloon, when he lost his footing and fell onto the subway tracks.

"When I looked down, I didn't see a train coming," he said. "Just sprung into action."

Ritcher had just ten short seconds to get out of the way of a C train that was coming right at him.

"I would like to thank God for allowing to have the privilege and helping to save someone's life," he said.

Ritcher along with another Good Samaritan jumped down on the tracks to help the injured man.

He was able to rescue the man a few seconds before the train roared into the station.

By then, MTA employee Cha-Nikka Cheatham was with the man who had a head injury and is in serious condition. He is scheduled to have surgery on Wednesday.

"The man really didn't look good so I was nervous," Cheatham said. "I was just like, I need him to be okay"

Once Roberto and Cheatham got home, they told their families what happened.

The MTA recognized them both for a job well done. Ritcher's been with the agency 27 years, while Cheatham, not even a year.

"I guess that's my first experience," Cheatham said. "And it was an experience."

RELATED: EXCLUSIVE: Subway conductor speaks out after he was pushed onto tracks