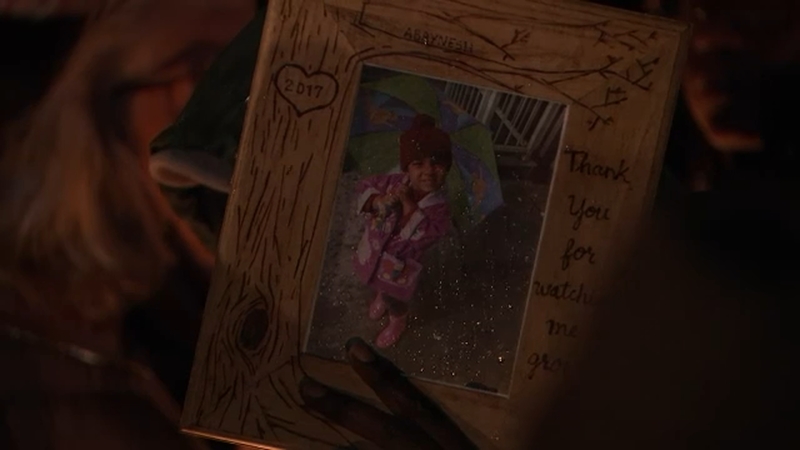 Neighbors gather for vigil after man killes wife, daughter and himself

HARLEM, Manhattan (WABC) -- Police in Harlem are investigating a horrific double murder-suicide in which a man appears to have killed his wife and 5-year-old daughter before taking his own life.

Sources tell Eyewitness News that the couple was going through a divorce.

Authorities made the gruesome discovery in an apartment on West 121st Street just after 9 p.m. Wednesday.

Responding officers found the bodies of 42-year-old Jennifer Schlecht and 5-year-old Abaynesh Schlecht Tedla. Both suffered neck trauma, and a knife was recovered at the scene.

The mother's body was in a bathroom, and the little girl was in a bedroom.

The child's father, 46-year-old Yonathan Tedla, was also dead in a bedroom.

While there is no documented domestic history against the wife or the child, police say the husband has made prior threats of violence against his wife.

In 2016, she reportedly sought and received a temporary restraining order against her husband for threatening behavior and harassment. The order has since expired.

Their neighbor said she didn't know about the pending divorce and said they seemed like a loving family.

"I just saw him yesterday, I talk to him every day," she said. "I mess around in the front all the time, and I see them coming back and forth from school. Kind, sweet, adored his daughter, adored her. I saw both of them, adored her. I'm flipping out, I just can't."
EMBED More News Videos

A man is believed to have killed his wife, their 5-year-old daughter, and himself in a double murder-suicide in Harlem.

The couple was due in court on Wednesday but did not show up. The woman's brother-in-law called police to request a welfare check.

What puzzles other neighbors and friends is that there did not appear to be any sign of trouble.

"Very, very nice guy," neighbor Patricia Brodin said. "Some type of guy was friendly with everybody, no trouble guy, mind his business and everything."

Others were visibly upset at the news and turned to each other for comfort.

"Crime has no place," one neighbor said. "It doesn't go to particular neighborhoods, you know, to hear that it is very, very sad."

The neighborhood gathered later Thursday night for a vigil to sing and pray together.

The community said they were having a hard time processing the news about the happy family they knew.

"I just cant believe it, the little girl was adorable and they just all seemed to love each other so much, I just cant I don't understand," one neighbor said.

"Jennifer Schlecht devoted her entire career to ensuring that women and girls in crisis situations have access to the best medical care possible including family planning and other reproductive health care. Most recently, she has been a vital part of the FP2020 family at the United Nations Foundation. She was a leader in the field of family planning and humanitarian response, and chose to work from New York so she could have more time with her darling daughter. She delighted in telling us about her daughter's first day of kindergarten and the clothes she picked out all by herself. In addition to being an adoring mother, her contribution to the lives of women and girls who are living in crisis situations has been extraordinary. That she should die under such brutal circumstances is beyond understanding. But we will all remember her for her life - and the thousands of lives she enriched - rather than the horrible way she died. We are utterly devastated."