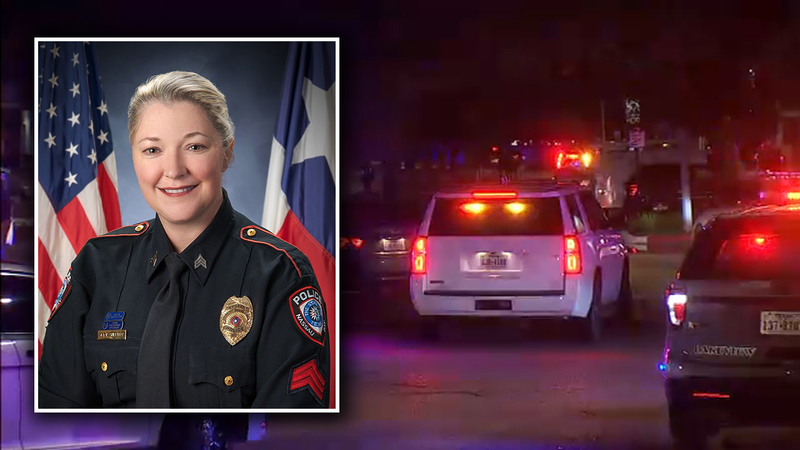 Nassau Bay officer dies after being hit during traffic stop

NASSAU BAY, Texas -- A Nassau Bay, Texas police sergeant attempting to arrest a man wanted on warrants was hit and killed by the suspect's vehicle and a manhunt is underway for the suspect.

Henderson now faces a felony murder charge, however that could be upgraded to capital murder, depending on his intent, detectives said.

Tavores D. Henderson (21 yrs, 10-28-98) is wanted in connection with the death of Nassau Bay PD Sgt. Kaila Sullivan. @HCSOTexas Investigators have filed a charge of Felony Murder on Henderson. He remains on the run & not yet in custody. If you know his whereabouts call us at pic.twitter.com/vqytqDiozm

Early Wednesday morning, authorities believed he may have been inside his mother's house in the area of Scott Street and Bellfort Street in southeast Houston.

Officials, including members of the SWAT team, surrounded the home.

Update on SWAT standoff:
Suspect NOT in the home.#abc13eyewitness pic.twitter.com/lBg9mUSZ9H

At one point, deputies could be heard giving instructions to the man when they thought he was inside the house.

"Come outside with your hands up. Once outside, deputies will give you instructions on what to do," officials said. "If you do not come out, the dog will be released, and he will bite you."

Authorities said his mother wasn't aware they were searching for him as she had been at work. They also said they have reason to believe Henderson is armed.

Sgt. Kaila Sullivan, 43, was attempting to arrest Henderson, who was wanted on warrants, when she was hit and killed by his vehicle.

According to the police department in the Clear Lake area, Sullivan was one of the officers conducting the traffic stop at an apartment complex in the 2000 block of San Sebastian Court around 8:30 p.m. Tuesday.

ORIGINAL STORY: Police sergeant dies after being hit by suspect in traffic stop

Henderson was wanted on a Harris County warrant for assault on a family member, police said.

While trying to arrest him, police said he fought with officers and was able to break free, re-enter the vehicle, and hit Sullivan as he drove away.


Sullivan was taken to HCA Clear Lake Hospital by ambulance, where she died.

According to Nassau Bay police Chief Tim Cromie, Sullivan would have marked her 16th anniversary working in the Nassau Bay Police Department.

"This a nightmare scenario for our city. (It's the) first time an officer has ever been seriously injured, much less killed, in the line of duty," said Nassau Bay Mayor Mark Denman.

We're told Henderson was due in court soon, possibly even Wednesday, on domestic violence charges linked to the warrant.

The incident came three days after the Houston Police Department lost a sergeant of its own during a confrontation with a suspect.

While he was known as a towering law enforcement officer, Chris Brewster was also a beloved athlete.