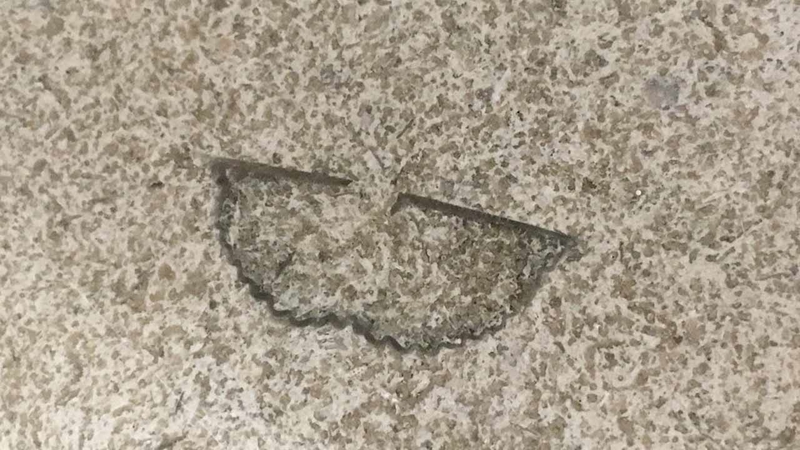 MINEOLA, Nassau County (WABC) -- If walls could talk, it would seem the Nassau County Courthouse would have quite a few interesting stories to tell.

Deputy Chief of the Nassau County Bureau Daniel Looney is hoping people appreciate this building's deep history as much as he does.

"I've worked in this building over 30 years," Looney told Eyewitness News. "I never knew there were fossils in the walls."

"I'm amazed that I've gone through this building thousands of times and I've never actually noticed them," Singas said.

It all started with a court officer, who told Looney that a geologist informed her about the fossils.

"But I wanted to confirm it, since I am not a paleontologist," Looney said. "So I sent pictures of them, sent them to the Museum of Natural History, and they said, 'Yes, you have Brachiopods and Bryzoans.'"

The fossils are from sea creatures that go back hundreds of millions of years, pre-dating modern day clams and scallops. They are commonly found in the type of limestone that was used to construct the building's walls back in 1938.

Stacey Sager reports on the historic findings in the Nassau County Courthouse.

But that's only a slice of this courthouse's rich history.

"To me, the most fascinating thing is this whole building was basically designed similar to the Lincoln Memorial," Looney said.

The courthouse was built in 1938 by the same architectural firm, which designed the Lincoln Memorial nearly 20 years earlier. And from the design to the details, there are numerous similarities.

Looney and his staff are working on applying for landmark status, which would open up federal funding for badly needed repairs. The walls have stains, the facade is cracked, and the clocks inside the courthouse don't even work.

"It's where justice is handed out, and we want to make sure that the majesty of what goes on inside these courtrooms is reflected in the buildings," Singas said.

For Looney, who just happens to be a history buff, it's been an investigative labor of love. Just ask him about the old desk in his office, which he found when he started working here.

Looney is certain that his desk is the desk from a 1950 photograph of former Nassau County District Attorney Frank Gulotta sitting at an old desk.

"I'm convinced beyond a reasonable doubt," Looney said. "It's the same desk."

Looney and his staff hope to finish applying for landmark status by year's end. The goal is to return the courthouse to its original grandeur, but also, to teach the public more about its fascinating history.