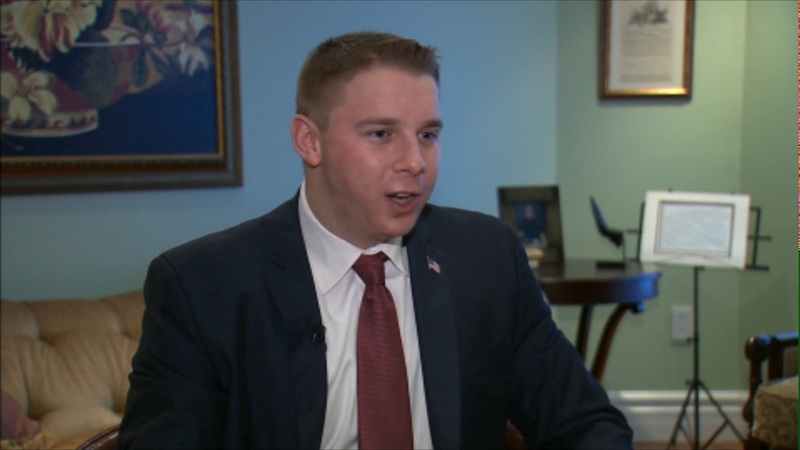 WOODBURY, Long Island (WABC) -- The youngest person elected to the legislature in Nassau County is getting down to work after being sworn in.

He's talking about his agenda and how he says he's in touch with problems facing his constituents who are his age.

To Joshua Lafazan's buddies he's just one of the guys. But to the people of Nassau County the 23-year-old is one of their newest and youngest legislators.

"There's a responsibility for me to carry the torch for my generation here," Lafazan told Eyewitness News reporter Kristin Thorne in an interview at his home in Woodbury Tuesday.

Lafazan beat out the Republican incumbent in Nassau County's 18th legislative district in November. His campaign team was composed primarily of young people, including teenagers.

Being the youngest is not unfamiliar territory for Lafazan. At 18, while still a senior at Syosset High School, he was elected to the Syosset School Board. He commuted home every weekend from Cornell University and later Harvard graduate school to fulfill his duties.

Lafazan said one of his top priorities as legislator is to address the county's heroin and opioid epidemic. In the next few days he'll be introducing legislation which will call for the creation of a 24-hour addiction assessment center in Nassau County, "where you can bring a loved one who is sick or where you as a person who needs help can show up for immediate screening, intervention and referral to treatment," he said.

Lafazan said he also plans to tackle Long Island's "brain drain" - the term commonly used to describe the exodus of young people from the island to more affordable areas of the country.

"We build affordable housing dedicated specifically to senior citizens," he said. "Why don't we do the same thing for young people, ages 23 to 30, who are in that transition with the Long Island housing market who can't afford to live here? And while we're at it let's give them a discounted LIRR ticket so they can commute from Long Island to the city for work and not have to break the bank."