Coronavirus Vaccine Updates: US life expectancy drops a year in pandemic, most since WWII 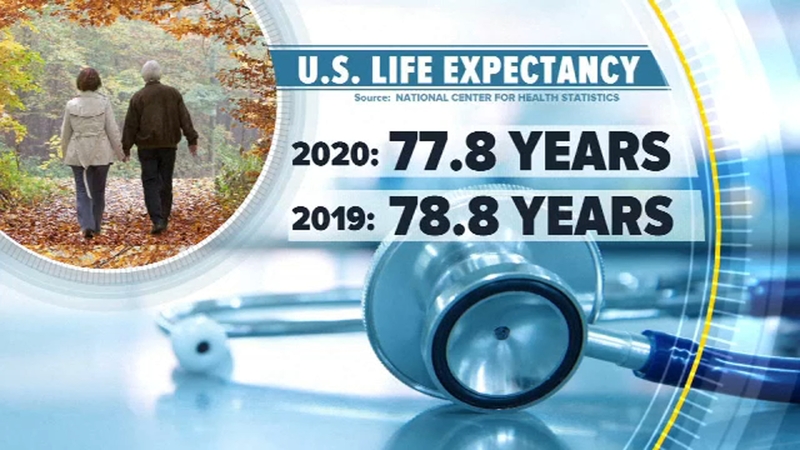 NEW YORK (WABC) -- Life expectancy in the United States dropped a staggering one year during the first half of 2020 as the coronavirus pandemic caused its first wave of deaths, health officials are reporting.

Minorities suffered the biggest impact, with Black Americans losing nearly three years and Hispanics, nearly two years, according to preliminary estimates Thursday from the Centers for Disease Control and Prevention.

"This is a huge decline," said Robert Anderson, who oversees the numbers for the CDC. "You have to go back to World War II, the 1940s, to find a decline like this."

As a group, Hispanics in the U.S. have had the most longevity and still do. Black people now lag white people by six years in life expectancy, reversing a trend that had been bringing their numbers closer since 1993.

Between 2019 and the first half of 2020, life expectancy decreased 2.7 years for Black people, to 72. It dropped 1.9 years for Hispanics, to 79.9, and 0.8 years for white people, to 78. The preliminary report did not analyze trends for Asian or Native Americans.

What to know about coronavirus:
Tracking COVID-19 availability and progress in NYC
New Jersey COVID-19 Vaccine Tracker
Find out if you are eligible and where you can go to get your vaccine
Coronavirus by zip code - New York City
Do you have coronavirus symptoms?

Dr. Raul Pino, the director of the Florida Department of Health in Orange County, said the women arrived at a vaccination site "dressed up as grannies" in bonnets, glasses and gloves but were turned away. The women appeared to be in their twenties, he told reporters.

A Feb. 8 decree signed by the governor of the Vatican city-state says that employees who opt out of vaccination without a proven medical reason could be subject to a sanction up to and including "the interruption of the relationship of employment."

Pfizer's trial will include 4,000 pregnant women. Half will get the vaccine, and half will get a placebo. Shortly after giving birth, women will be told which they got, and those who got the placebo will be given the option to get the vaccine.

Experts warn against COVID-19 variants as states reopen
As states lift mask rules and ease restrictions on restaurants and other businesses because of falling case numbers, public health officials say authorities are overlooking potentially more dangerous COVID-19 variants that are quietly spreading through the U.S.

Scientists widely agree that the U.S. simply doesn't have enough of a handle on the variants to roll back public health measures and is at risk of fumbling yet another phase of the pandemic after letting the virus rage through the country over the last year and kill nearly 500,000 people.

How a Texas synagogue got hundreds vaccinated after power outages threatened doses
After an unprecedented winter storm cut off power to the freezers storing vaccines in Harris County, Texas, thousands of doses were at risk of expiring within hours. Alan Hoffman, an internist at Houston Methodist Hospital, received a phone call Monday morning from Methodist executive Roberta Schwartz asking how quickly could they get shots in arms?

It was a race against the clock. Seeking a place that was accessible by foot and could host large groups of people, they settled on an unlikely venue: United Orthodox Synagogues, a local Houston synagogue. Schwartz called Rabbi Barry Gelman, the synagogue's spiritual leader, who secured the building and rallied locals via email and WhatsApp.

Medical imaging shows how COVID attacks the body, new study finds
Medical images can reveal COVID-19's long-term damage on patients' muscles, nerves, joints, bones and other soft tissues, and the imaging can lead to better-guided treatment for patients, according to a new medical study released Wednesday.

The new Northwestern University study, published Feb. 17 in the journal Skeletal Radiology, detailed how various types of imaging including ultrasounds, x-rays, MRIs, and CT scans, can confirm how the body attacks itself.

In the video, board member Kim Beede uses expletives in talking about parents. The board also talks about making parents call in and record their public comments rather than making them appear live in a meeting and the recording would cut them off at exactly three minutes.

When are the stimulus checks coming? IRS says all of 1st, 2nd economic impact payments sent out, leaving those still waiting on edge
The IRS announced that all first and second stimulus payments have been issued. If you're still waiting on a payment, chances are this isn't the news you want to hear. But, there can be a solution.

Thursday opening of vaccine sites delayed
Due to the COVID vaccine supply shortage and shipments delayed by storms, NYC is delaying the opening of vaccination sites at Empire Outlets on Staten Island and Martin Van Buren High School in Queens that were originally planned for Thursday. A vaccine shipment that was expected on Saturday is now not arriving until Sunday, the mayor said.

"I cannot be clearer: we have the infrastructure in place to deliver half a million doses per week," Mayor Bill de Blasio said. "All that's missing is the supply to get it done. We need our the pharmaceutical companies to step-up and give us the doses we need to vaccinate the people of our city. There is not a moment to waste."

The FBI and federal prosecutors in Brooklyn are investigating Gov. Andrew Cuomo's coronavirus task force with a particular focus on his administration's handling of nursing homes early in the pandemic, two sources familiar with the matter told ABC News.

The investigation, first reported by the Albany Times Union, is in its initial stages. Subpoenas have been issued, the sources said.

Top 7 COVID vaccine questions answered
You had questions about COVID-19 vaccines and 7 On Your Side is getting you answers from doctors on the front line of the pandemic.


Submit a News Tip or Question