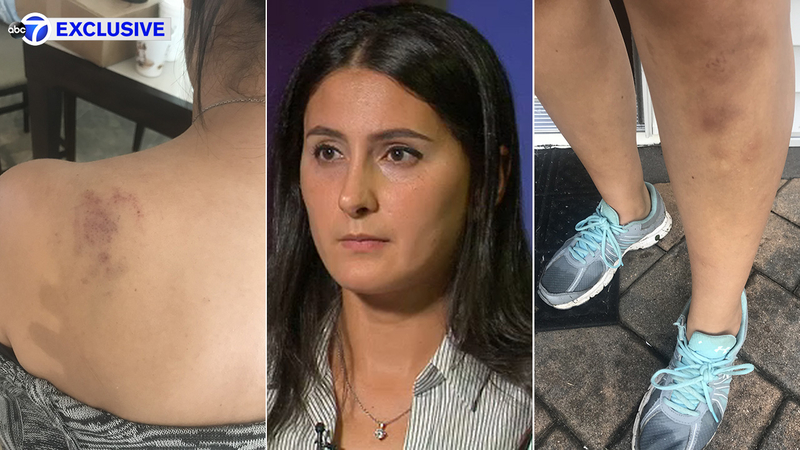 NEW YORK (WABC) -- A veteran NYPD detective claims she was physically assaulted by her supervisor and that when she pushed to press charges, the department stopped her.

In a rare on-the-record interview with 7 On Your Side Investigates, Detective Nela Gomez says she and her boss, Lieutenant Robert Delaney, were working a hate crimes case on Labor Day weekend when he snapped on her for reasons she still hasn't been able to figure out.

The 13-year veteran alleges that Delaney, using all his force, slammed his office door on her.

"The door hits me, and now I fly to the floor and land on the corner my left side," she said. "Now I'm devastated and terrified."

Gomez said she got up, fled his office, and immediately called Internal Affairs, who sent inspectors to the precinct in Lower Manhattan.

Despite having bruises on her legs and her back from both the door hitting her and the fall, Gomez says investigators almost immediately began to downplay the incident. When she pushed to press charges, Gomez said investigators moved to take her gun and badge.

"They made me feel like I did something wrong," she said. "I was penalized. My gun was taken, not his. I had to undergo a psych evaluation. He didn't."

We caught up with Delaney as he was leaving for work, and he said he could not talk about the incident. But when asked if he assaulted Gomez, he responded, "No. No, I did not."

The NYPD would only say this is an ongoing internal investigation, but Gomez says it is clearly a cover-up. She feels like she has nothing left to lose.

"I ask my own for help, and they didn't give it to me," she said. "They instead re-victimized me. What's left?"

Gomez has since been given her gun and badge back, but she has been transferred to another command. Delaney remains a supervisor with the Hate Crimes Task Force.

The NYPD responded to an Eyewitness News request for comment by saying: "This is an ongoing internal investigation."