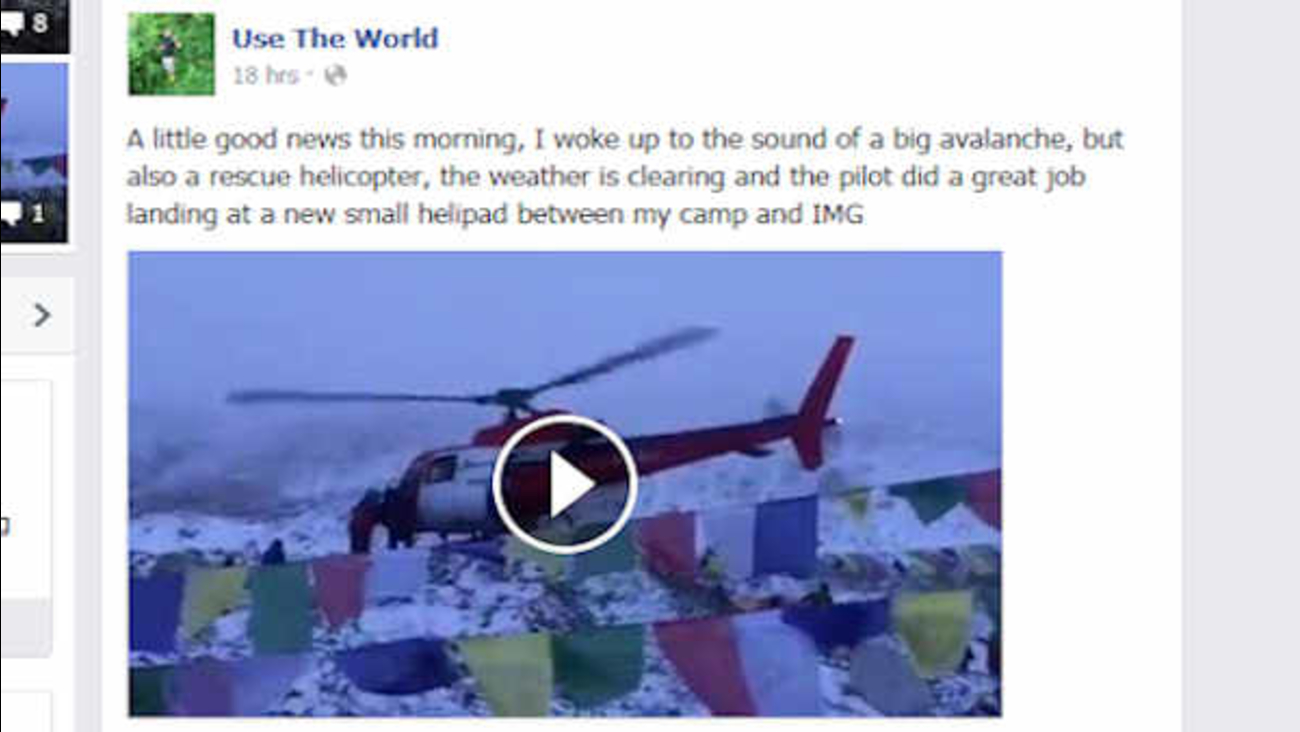 NEW YORK (WABC) -- A Danish mountain climber who was in Nepal when the earthquake struck has been communicating via Facebook about the moments after the quake and his rush to find safety.

45-year old Carsten Lillelund Pedersen, a Dane who was climbing Everest, the world's highest mountain, with a Belgian, Jelle Veyt, said on his Facebook page that they were at Khumbu Icefall , a rugged area of collapsed ice and snow close to base camp at 5,000 meters (16,500 feet) when the earthquake hit.

"Right now, it is pretty chaotic and we try to help those injured," Pedersen said on his Facebook page. (Courtesy Carsten Lillelund Pedersen/Facebook)

Pedersen narrates a rescue operation with a helicopter landing to take some climbers to safety.

After the quake, Pederson wrote, "BREAKING NEWS: earthquake near Everest was very strong and we could feel the earth shaking a lot, and then a huge avalanche swept over basecamp and Jelle and I had to run for our life but I did not reach the tents and I had to hide behind the the stone puja ... I could not see anything and it was hard to breath."

Sunday, he wrote, "A little good news this morning, I woke up to the sound of a big avalanche, but also a rescue helicopter, the weather is clearing and the pilot did a great job landing at a new small helipad between my camp and IMG. The doctors lost 3 patients during the night, and we now have 14 confirmed dead and 49 injured, many with head injuries, and I just found out that the girlfriend of one of my friends was one of the first that died. This is really tragic and I am all in tears."

A mountaineering guide, Ang Tshering, said an avalanche after the quake swept base camp where expeditions were preparing to scale Everest, flattening tents and killing at least 10 climbers and guides and leaving an unknown number injured and missing and others cut off. Their nationalities were not immediately known.

Norwegian climber Teodor Glomnes Johansen said that people at base camp were working on saving lives.

"All those who are unharmed organize help with the rescue efforts. Men, women and Sherpas are working side by side. The job right now is to assist the doctors in the camp here," he told Norway's VG newspaper.