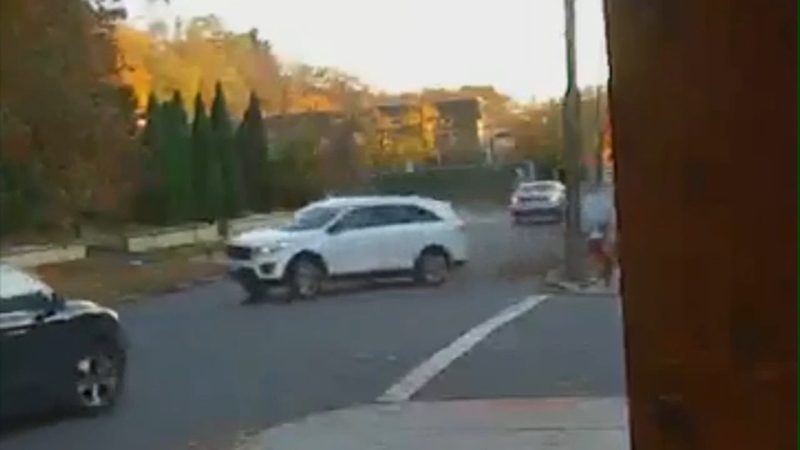 TENAFLY, New Jersey (WABC) -- Police in New Jersey are searching for the driver wanted in a hit-and-run that injured a 28-year-old bicyclist who had just left a local bicycle shop when he was struck.

Police say the out-of-control SUV driver hit a utility pole before crashing into the victim, who was riding on the sidewalk with another bicyclist on County Road in Tenafly on Saturday.

Shepard Grinker is the owner of the Tenafly Bicycle Workshop. He spoke exclusively to Eyewitness News.

Grinker says two of his employees knew right away something terrible had just happened.

"They just heard the screeching of the tires," he said.
EMBED More News Videos

The screeching was the sound of other vehicles trying to get out of the way of that SUV.

Police say the victim suffered a broken leg and cuts to his face.

The accident happened around 4:15 p.m. Saturday at the intersection of Mahan Street, along a popular route for cyclists from the city.
Investigators believe the SUV crossed into oncoming traffic and then struck a utility pole before slamming into the bicyclist.

"They knew something had happened, and then there was a couple witnesses who were at the store around the corner who came running in to tell us to call 911," added Grinker.

The other bicyclist was not injured.

The victim was transported to Hackensack University Medical Center. His condition is unknown at this hour.

Police are looking for a mid-sized white SUV with substantial front-end damage.

UPDATE: Police have arrested 62-year-old Peter Lee, of Cresskill, in connection with this incident. He is charged with one count of leaving the scene of a motor vehicle collision resulting in serious bodily injury,