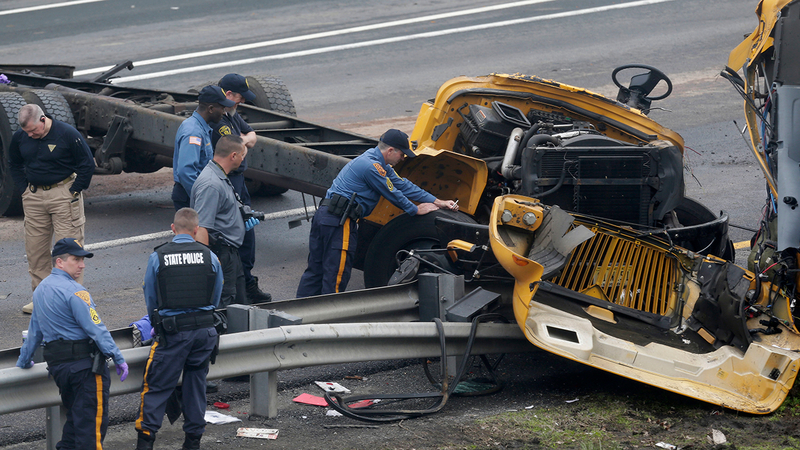 Hudy Muldrow, 77, had a valid drivers license that is not currently suspended and has no active points, and he has the appropriate commercial license to drive a school bus.

However, since first getting his license in 1975, he has a total of 14 license suspensions, eight speeding tickets, a careless driving ticket and a ticket for an improper turn in 2010. His most recent suspension was on December 20, 2017, from parking violations in Jersey City. His license was restored January 3, 2018.

"His driving record raises a lot of questions and potential areas we have to explore as well as the negligence in allowing him to drive children," said the attorney, David Fried.

The wake for a long-time teacher killed in the crash is being held Tuesday and Wednesday.

Jennifer Williamson, 51, and 10-year-old fifth-grader Miranda Vargas died on the way to a field trip last Thursday when the school bus collided with a dump truck on I-80 in Mount Olive Township. More than 40 others were injured.

Her husband said in a statement he was "in shock, devastated and totally crushed" by her death.

Williamson taught in the same grade and same classroom in East Brook Middle School for 20 years. Viewings will be held from 3 p.m. to 8 p.m. both days at the Vander Plaat Memorial Home, located at 113 South Farview Avenue in Paramus. A funeral Mass is scheduled for Thursday at 10 a.m. at Our Lady of the Visitation Roman Catholic Church, located at 234 North Farview Avenue in Paramus, with interment to follow at George Washington Memorial Park.

"It is so difficult to put into words the sorrow that is felt over the tragic loss of our beautiful student Miranda Vargas and our beloved teacher Mrs. Williamson," the East Brook Middle School PTA said on its Facebook page. "As we mourn the tragic loss of these beautiful angels, we continuously pray for the students and teachers who remain in the hospital and those who are dealing with their injuries and scars both physically and emotionally."

Vargas was laid to rest Monday, with the entire community coming together to attend her funeral. She is survived by her twin sister, two brothers and parents, who penned a heartbreaking obituary.

The bus was one of three taking students from East Brook Middle School in Paramus to Waterloo Village, a historic site depicting a Lenape Indian community and once-thriving port. The other buses made it to the site but returned to the school following the crash, which left the bus lying on its side on the guardrail with the front ripped off and the undercarriage sheared off.

Thirty-eight kids, six chaperones and both drivers were all injured in the crash.