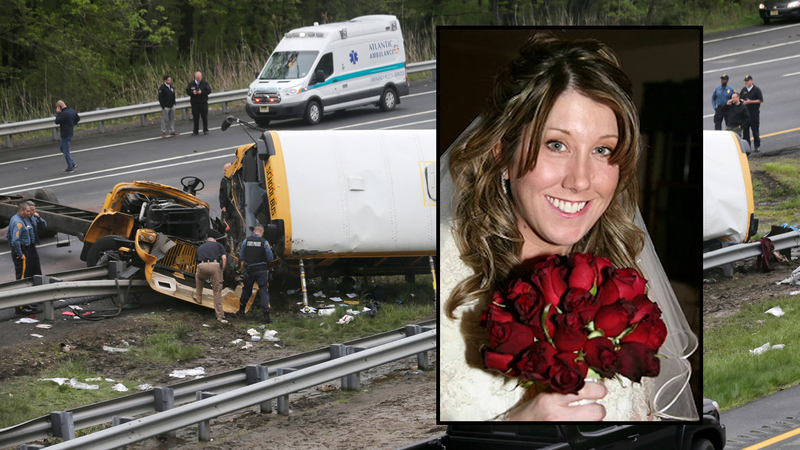 MOUNT OLIVE TOWNSHIP, New Jersey (WABC) -- Investigators are looking for answers Friday after a child and a teacher were killed and 44 injured when a school bus collided with a dump truck and overturned in New Jersey Thursday morning.

The teacher killed in the crash has been identified as Jennifer Williamson-Kennedy, who taught in the school district for more than 20 years. Her husband said in a statement he was "in shock, devastated and totally crushed" by her death.

The crash happened just before 10:30 a.m. on I-80 West in Mount Olive Township, with the bus ending up on its side in the grass median with the front end completely torn off.

The bus was carrying 38 fifth grade students and seven adults, including the driver, from East Brook Middle School in Paramus and was headed to Waterloo Village as part of a field trip for fifth graders.

"I feel really sad and devastated, because I had her for one whole year," former student Savannah Clark said. "And she made things really really fun and helpful for us kids."

Schools were open Friday, with crisis counselors on hand to help students and staff. But evening activities were canceled, and standardized testing was canceled for Friday and next Monday.

Their grief is shared together in Paramus, among students and teachers, and within the community. They place flowers on a growing memorial, and they tie ribbons.

Gina and Patrick Nannola came to pick up their daughter Friday. She was one of Williamson-Kennedy's students.

"It's very heartfelt to have to inform your child that one of their classmates did pass away, as well as his teacher," parent Stacey Bender said. "So my thoughts and prayers are with all of the families right now."

And it was important for all to be together in their school.

"It's very somber," parent Lisa Clark said. "It's something very hard to wrap your head around, and I feel for these families."

Investigators combed through evidence Friday, seeking answers as to why the accident happened. The bus wound up on a guardrail close to a spot for emergency vehicles to make U-Turns on the highway. A sign there reads "No Turns."

Officials said Friday that most of the 43 injured people from the bus were discharged from hospitals, but they declined to provide details about the types and severity of the injuries they suffered. Officials also didn't detail what injuries the truck driver suffered.

The crash left the bus lying on its side on the guardrail, its undercarriage and front end sheared off and its steering wheel exposed. Some of the victims crawled out of the emergency exit in the back of the bus and an escape hatch on the roof.

Cleanup crews moved the wreckage of the bus Thursday night, and I-80 was reopened in the area. Investigators searched for clues and focused on the rear of the bus, the point of impact.

State police are investigating whether the bus driver somehow got separated from two other buses, missed his exit, then made an illegal U-turn moments before the bus was rear-ended by the dump truck.

BREAKING: Mount Olive school bus being lifted off I80. Heavy damage to rear half of bus. Two officials briefed on crash confirm that authorities are investigating whether school bus driver made illegal U-turn before deadly crash in New Jersey. pic.twitter.com/mGWEfw9fFh

"Our thoughts and prayers continue to go out to them as they recover," Bergen County Executive Jim Tedesco said. "This community has been strong, will continue to be strong, come together and support the entire education community."