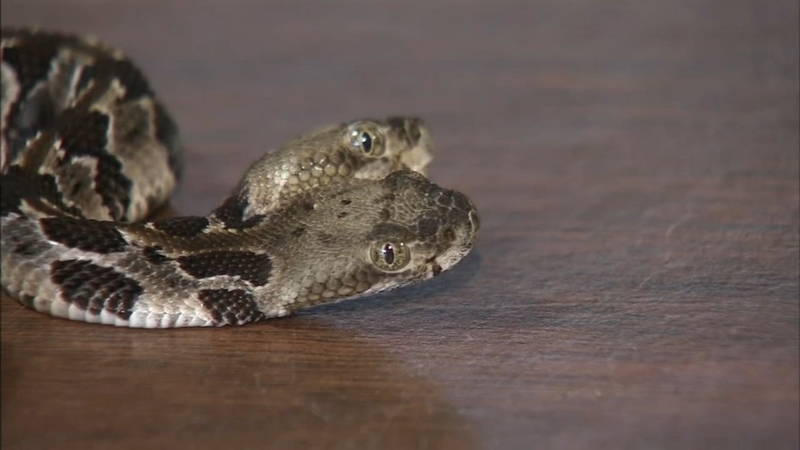 PEMBERTON, New Jersey -- It looks like something from a science fiction movie -- a newborn two-headed timber rattlesnake found in New Jersey's Pine Barrens.

It weighs an estimated one to two ounces and is a rarity who two fully formed heads, four eyes, and two flicking tongues but one body.

Herpetologist Dave Schneider, who works for Herpetological Associates of Burlington County, was one of two employees named Dave who found the venomous snake.

Given the men's same first names and the snakes two heads, the 8- to 10-inch-long snake has been named Double Dave.

Herpetological Associates CEO Bob Zappalorti says the snake has two brains and each head acts independently of the other.

Double-headed snakes rarely survive in the wild, as they sometimes move slowly and can be easy targets for predators.

Herpeological Associates is an environmental consulting firm that works to protect the habitats of endangered species, and Zappalorti's firm also maintains an extensive collection of endangered snakes.

Both Schneider and Zappalorti have decades of experience with handling and raising snakes, but neither have dealt with a two-headed snake.

Both men hope Double Dave has a fully developed digestive system, will take nourishment, and will flourish.

Two-headed snakes have been reported to live as long as 15 to 20 years in captivity.