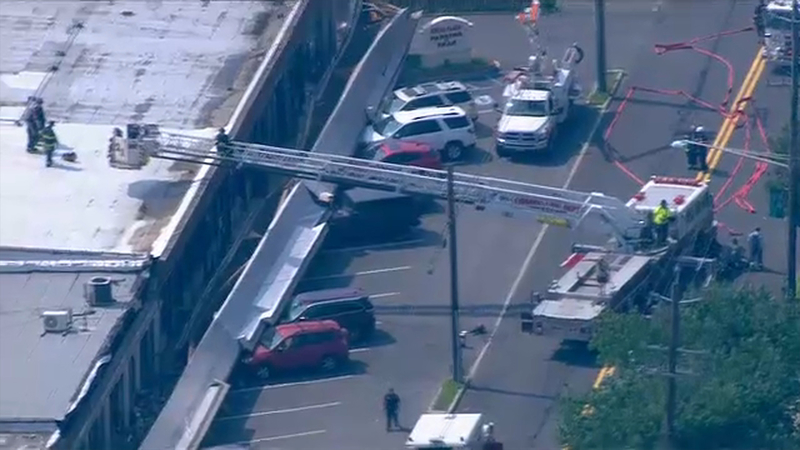 RIVER EDGE, New Jersey (WABC) -- Authorities are on the scene after the facade of a New Jersey strip mall collapsed Tuesday morning.

Anthony Johnson has more on the facade collapse in River Edge, New Jersey.

The wood and concrete facade came down with a thunderous crash, crushing several vehicles parked in the strip mall and leaving piles of bricks and rubble.

"I was just starting to open up," store employee Courtney Lichtenberger said. "I couldn't see that my car was crushed because I couldn't get out. And it wasn't until after the firemen got me out that I saw my car was completely under it."

There are no reports of injuries, but some employees and shoppers were stuck inside with the exits blocked.

"We heard this loud crash, sounded like a squeak and a crash," business owner Beverly Antoci said. "So we opened up the door, we looked out, and we couldn't believe our eyes what we saw."

Some of the business owners say the strip mall had a big fire several years ago, and once it was reopened, a new facade was put up. There was apparently no warning of a possible collapse, and the owners say there was no work taking place at the time.

"We're worried about a secondary collapse of the brick parapet there, and then the other big problem, obviously, is the weather," said George O'Connell, with the River Edge Fire Department. "Because the heat is terrible."

An investigation is underway to determine what caused the collapse.