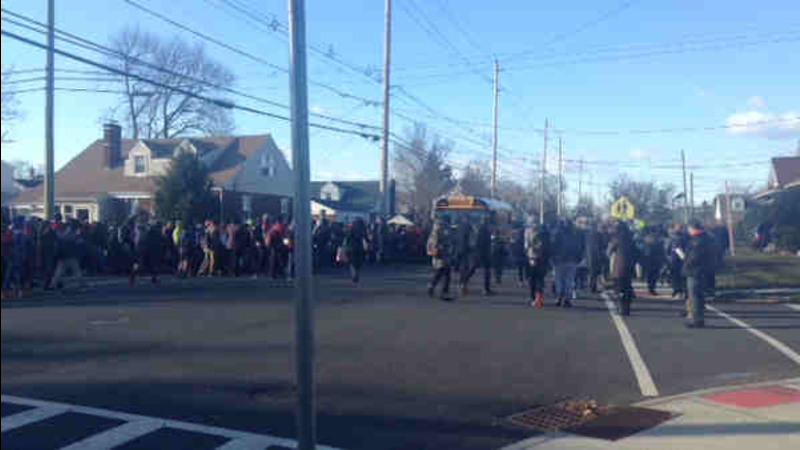 CLIFTON, New Jersey (WABC) -- Bomb threats were made against schools in at least ten New Jersey towns Tuesday, and now authorities believe they are part of a pattern that stretches up and down the East Coast.

None of the threats was considered valid, but schools in Garfield, Bergenfield, Leonia, Fair Lawn, Englewood, Teaneck, Hackensack, Tenafly and Clifton, along with Sayreville in Middlesex County, received the robocall threats overnight. Police are investigating whether they are related.

Some schools were evacuated, while others instituted lockdowns and students were sheltered in place.

Clifton Police Department spokesman Robert Bracken said the high school received a voicemail saying that a bomb had been placed in one of the schools and there was going to be a mass shooting. Other schools received similar threats.

Bracken said there's no indication the threat was real, but precautions were taken.

The alerts left many petrified. "I thought they were going to come here and bomb my school and it's my last year and I don't want this to happen in my last year," said student Britney Raymond.

In Garfield, every school in the district received a threatening call.

"We deployed an officer to each school, at least one if not multiple. We worked in conjunction with the school security and offered to lock down the schools at that point and secure them until we had a chance to get the bomb detection dogs there," said Darren Sucorowski of the Garfield Police Department.

In addition to the threats in New Jersey, 15 were made in Massachusetts, three in Delaware, two in Maryland and one in Pennsylvania.

The FBI said it is aware of the situation, and that the incidents are being handled by local law enforcement partners.

The FBI has volunteered to assist in the investigation since the threat included five states.

The robotic calls were routed from Bakersfield, California.

"It was scary because everyone was joking around about it, taking it very lightly, but it's scary to have it in your face like that," said Fair Lawn student Adam Tchakhkive. "But thankfully no one got hurt, I don't know about no one because I just know Fair Lawn."