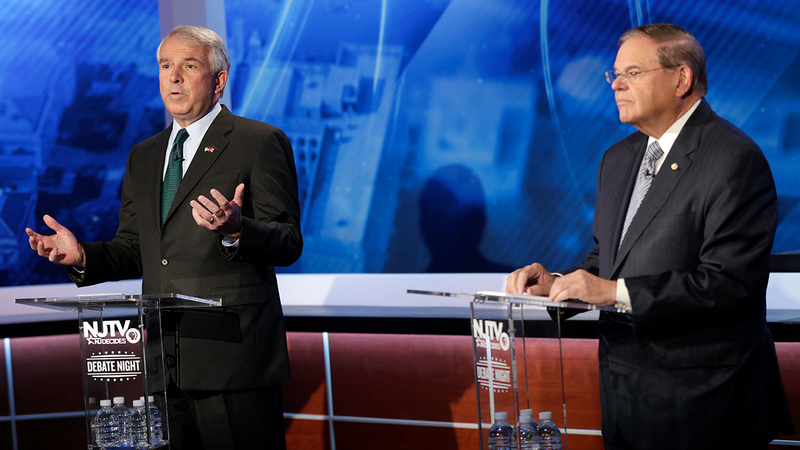 Hugin said during the NJTV debate, which was televised statewide, that the two-term senator "failed and embarrassed us." Meanwhile, Menendez called Hugin, a former pharmaceutical executive, greedy over high cancer drug prices.

Menendez is on the defensive in a race where Hugin poured $24 million of his own money into ads attacking him over his 2017 corruption trial. Menendez denied wrongdoing in the bribery case, and the trial ended in a mistrial. Prosecutors dropped the charges.

It took an hour before a controversial Hugin ad claiming FBI evidence of Mendendez having sex with underage prostitutes was addressed. The statements in the ad are not true, but Hugin defended it.

"Only 10 percent of New Jerseyans even knew there were sworn FBI affidavits with very specific allegations and corroborating evidence about sexual misconduct," Hugin said.

The Washington Post gave Hugin's ad four "Pinocchios," meaning it is a lie. Menendez is furious about it.

President Donald Trump was also a big issue in the debate, with Hugin promising he's independent and not a Trump Republican.

But Menendez hit back, calling Trump horrible for New Jersey and claiming the president has made politics increasingly toxic.

When it came to Hugin's leadership of a large drug company, Menendez questioned why one anti-cancer drug doubled in price to $16,000 a month.

"This is an example of greed," Menendez said. "He raised the cost of that drug not once, not twice, but three times. He preyed on the most vulnerable. Why? For profit."

Hugin retired from Celgene this year.

Experts say the race is tighter than expected despite a Democratic registration advantage.