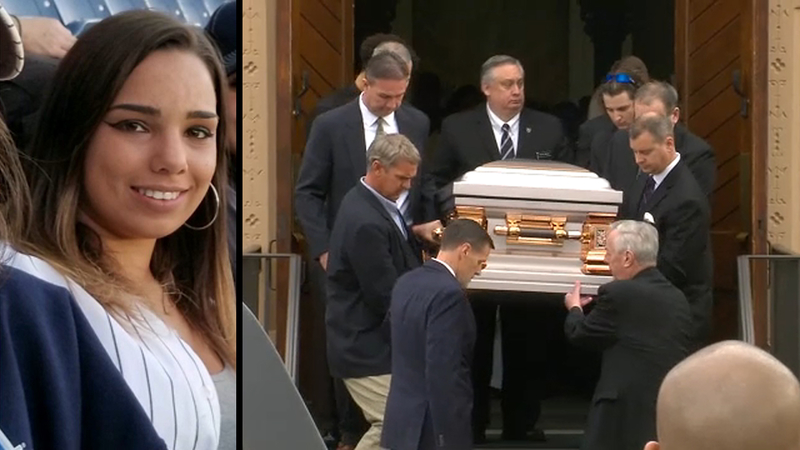 FREEHOLD, New Jersey (WABC) -- Family and friends gathered Friday to bid a final farewell to a New Jersey woman allegedly killed by her ex-boyfriend, who then took his own life.

Parze was last seen October 30 after she dropped her family off at their house before heading home. Her 29-year-old on-again, off-again boyfriend John Ozbilgen was considered a person of interest before his death.

Parze's body was discovered in Old Bridge on Sunday by two teenage boys walking along Route 9, near where searchers had been looking since she disappeared.

"It goes without saying that our family is devastated," dad Ed Parze said after her remains were found. "Our friends, our family, our community, and our lives will never be the same. But Stephanie is coming home at last, where she belongs.''

Monmouth County Prosecutor Christopher Gramiccioni said Monday that investigators believe Parze was killed late on Oct. 30 or early on Oct. 31, and that Ozbilgen was responsible. Among items recovered from his home was a note to his parents that read, what they "heard in the news was true," except for the charges of child pornography.

He did not write where Parze's remains might have been placed.

"We had concluded and confirmed that he was responsible for her death, but the note reaffirmed it," Gramiccioni said.

Ozbilgen's family disputed that claim though, releasing the following statement:

"We are very sorry for her family and we hope they can find peace through this nightmare. We don't truly know what happened to Stephanie, but what we do know is John never said that he hurt Stephanie to us or in the note he left us. We believe he is innocent, but all the pressure from the false child pornography charges and the constant searches and relentlessness caused him to take his own life."

Parze was last seen leaving her parents' home in Freehold after a night out with relatives in New Brunswick. Parze drove back to her late grandmother's nearby home in Freehold, but then failed to show up for a nanny job the next day. Relatives who went there found her car and phone, but there was no sign of forced entry.