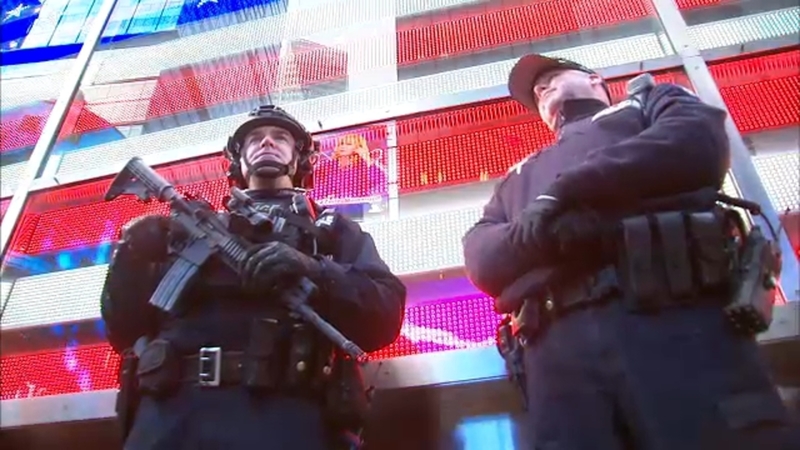 "It certainly is a challenging night," says Counter-terrorism Chief James Waters. "It's the largest event for the city, the Super Bowl if you will."

Chief Waters gave Eyewitness News exclusive access as officers with the Critical Response Command in the Counter-terrorism Bureau prepared for the extravaganza.

Each year means assessing new threats and developing new tactics based on recent incidents around the world such as the December Christmas market shooting in Strasbourg, France; the October synagogue shooting in Pittsburgh and the 2017 Halloween Bike Path vehicle ramming attack in New York City.

"We look at the threat picture, what's going on around the world," Chief Waters said.

"We train and deploy our people accordingly... We train the cops throughout the year. So, it's not like we wake up on New Year's Eve morning and say, 'OK put your uniform on and go out there.'"

Officers will also install over 200 cement blocks in addition to more permanent metal bollards in and around Times Square.

More than 50 canine teams will survey the crowds on alert for explosive material.

These teams will include the newly added German Shepherds and Malinoises.

"Part of the secret to our success is, we are never quite satisfied we are always looking to improve," Waters said. "I started thinking about the event this year, last year."

Spectators will pass through metal detectors and officers with wands at 12 access points to gain entry to the secure zone between 6th and 8th avenues and 38th to 59th streets.

Police drones will back up the more than 1,200 security cameras in the area leaving almost no part of Times Square out of view.

Officers will also use drone detecting technology to eliminate any unauthorized drones in the area.

Behind the scenes, counter-terrorism teams will monitor social media and other activity for any potential threats.