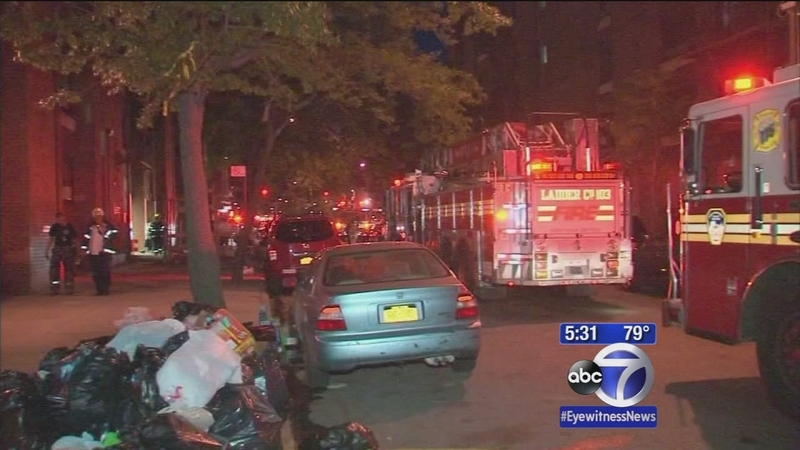 EAST NEW YORK (WABC) -- One person was killed and three others injured in an apartment building fire in Brooklyn early Monday.

The flames broke out on the second floor of the Unity Plaza Houses, a six-story city-run housing complex, on Georgia Avenue in East New York just after 3 a.m.

The fire raced through a second floor apartment so fast there was little anyone could do.

Two residents were trapped on the second floor, reportedly unconscious from the heavy smoke. Firefighters from Ladder 103 rushed in and quickly became trapped after sections of ceiling collapsed onto them.

One of the fire victims spoke to us exclusively about the frightening moments.

"I just screamed for my kids. I called out Marquis and Elijah, and I called out my Aunt Adrian," said Shiron Frost.

Doing everything in his power, Frost was desperately trying to save his family as the thick dense smoke was filling the apartment and fire was pushing them away from an escape.

"I picked him up and ran with him and threw him on the fire escape," said Frost.

He found his two boys, 12-year old Marquis and 9-year old Elijah, but could not get to his aunt, Adrian Mitchell, who he says later died, and a friend of hers who jumped from a two-story window and is in critical condition.

"I tried, I tried, I really tried. I couldn't. I told the fireman, look for my aunt," said Frost.

Firefighters from Ladder 103 and Engine 290 were some of the first to arrive. Attacking the fire both inside and out, they were able to make rescues as the ceiling collapsed around them.

Heavy smoke was also forcing other neighbors from their apartments.

"I was reluctant to leave myself but I said no, I'm going to get out of here. That's when I took out my whistle and started blowing," said neighbor Brender Jones.

Other neighbors were awakened by the cries for help and the rescue attempts. Kamille Harris lives across the street.

"For it to spread that fast it had to be an electrical fire. That's the only assumption I can make. That is simply terrible," Harris said.

There were seven people inside the building at the time.

The cause of the fire is unknown at this time, and the investigation is ongoing.