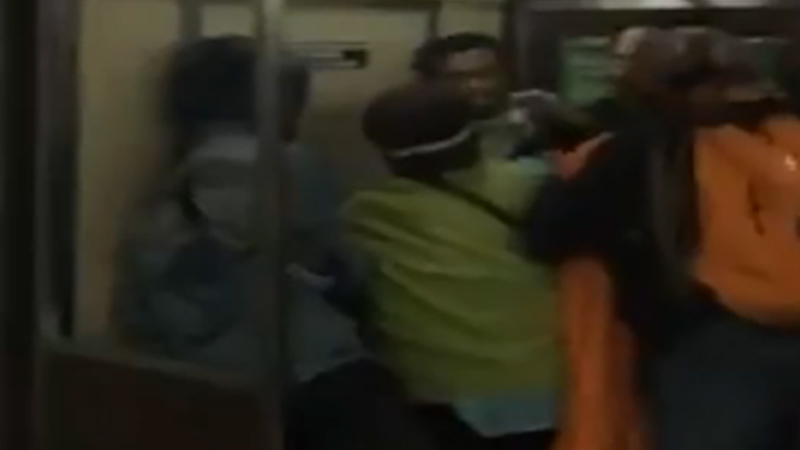 NEW YORK CITY (WABC) -- Passengers intervened to break up a fight on a subway train heading from Brooklyn to Manhattan Thursday night, and the incident was recorded on cell phone video.

It happened around 7:30 p.m. on a northbound A train between the High Street and Fulton Street stations.

"I was sitting towards one end of the train, and as the doors closed, we heard this commotion at the other end," said a witness who didn't want her name used. "I thought it was high schoolers, but then it escalated and you could tell it was serious. Three guys were yelling, shoving and punching at this other guy."

The video shows a group of good Samaritans getting in the middle of the fight and trying to deescalate situation.

"So many people rushed to diffuse this situation, which is why it got broken up," the witness said. "That is such a New York response and part of why I love the spirit of this city."

You can hear commuters yell "Stop!" as they try to bring the melee to an end. At one point, someone pulled the emergency brake.

"It was all pretty confusing and seemed to be fueled by adrenaline and bad choices," the witness said. "I feel very certain that if one of them had a weapon, things would have been much, much worse. In fact, one of the guys told the entire train car as much. He said, 'If I had it, nobody on this train would stop it.'"

At this point, no one has come forward to file a police report.

The MTA offered the following advice to commuters who find themselves in a similar situation:
--Riders should not pull an emergency brake cord unless instructed to by NYC Transit employees or police
--Some train cars have call buttons that allow for communication with the conductor, who has a radio
--Use phones to dial 911 where possible. Exit at the following stop. After exiting train at next station, use a Help Point, if available, to notify authorities.