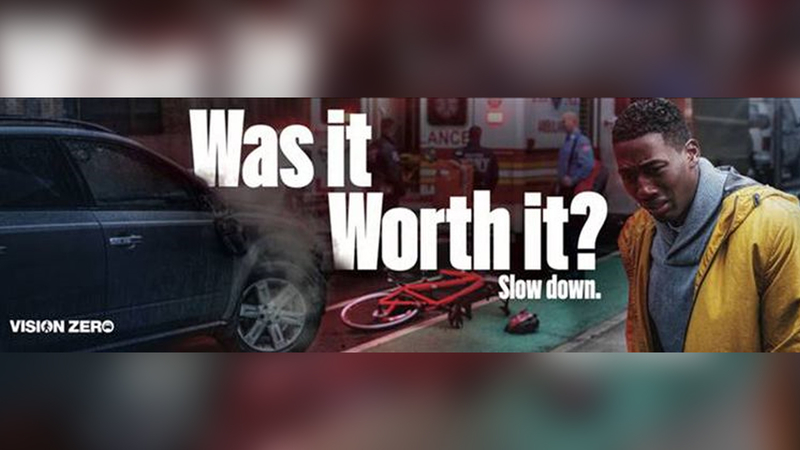 The ad campaign asks, "Was it worth it?" to male drivers, who officials say are responsible for roughly three-quarters of fatal crashes in the city.

"We are telling the story from the perspective of the driver, making them to ask the questions about their own driving behavior," DOT Commissioner Polly Trottenberg said.

The first of the DOT's ad campaign, which is part of the city's Vision Zero initiative, is a giant billboard at 181st Street and Broadway in Washington Heights.

"How do we get to the drivers?" City Council member Ydanis Rodriguez said. "How do we convince and persuade any driver that at some point we are behind the wheel but most of the time we are also walking?"

The ads are running in both English and Spanish

Earlier this week, an unlicensed male driver behind the wheel of a Ford F-250 fatally struck 3-year-old Bertin Dejesus in East Harlem, an incident officials say is just one example of the campaign's target audience.

"There is no doubt we grieve over all of these fatalities, but I think we all particularly grieve over the deaths of children like Bertin," Trottenberg said.

Officials said 23 of the billboards will be utilized around the city, along with enhanced enforcement by the NYPD trying to change a culture.

And other transportation advocates believe this campaign is another helpful tool.

"There is so much more that we can be doing to keep pedestrians, cyclists and motorists safe on our streets," said Joseph Cutrufo, with Transportation Alternatives.

Now, that quest continues with one simple question - Was it worth it?