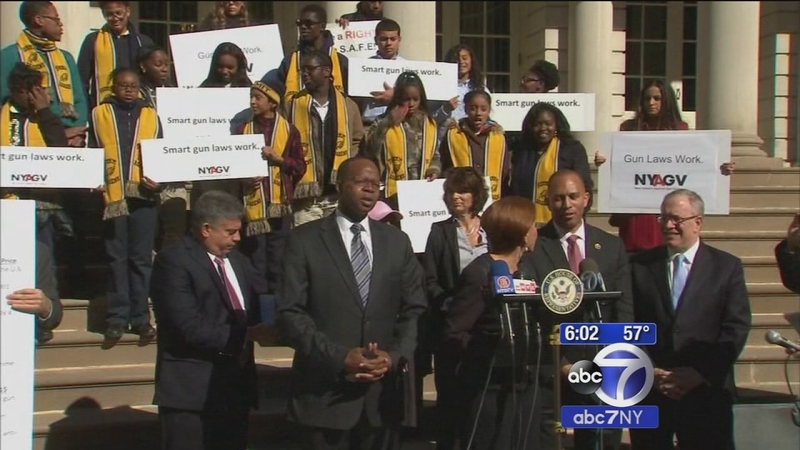 NEW YORK (WABC) -- New York City leaders are coming together with a new bill to crackdown on gun violence.

Monday's bill introduced on the steps of City Hall where flags fly at half-staff in honor of Officer Randolph Holder, killed in the line-of-duty last week.

"We are in the midst of a gun violence epidemic in this country that should shock the conscience of every decent American," said Rep. Hakeem Jeffries, (D) New York.

The bill sponsored by Congresswoman Nydia Velazquez would put a $100 tax on every gun sold in America. Much of that tax money would go to fund new mental health programs.

Could such a bill pass in this Republican-controlled Congress?

That's doubtful, but Velazquez says something has to change.

"Like Abraham Lincoln said, public sentiment is everything. And I know that the public is asking for leadership in Washington," said Rep. Nydia Velazquez, (D) New York.

People like Shenee Johnson whose 17-year-old son, Kedrick, was killed at a party in May 2010.

She too is frustrated by Washington.

"Well that's why we have to keep fighting and pushing and make them understand, we're losing too many lives, my son was on his way to college on a scholarship," Johnson said.

Organizers of Monday's event decried the power of the NRA, saying Washington is crippled with inaction despite so many shootings across America.

"How many of our children have to die? How many of our police officers have to be shot and killed before we have Congress pass sensible gun legislation," said Ken Thompson, the Brooklyn District Attorney.